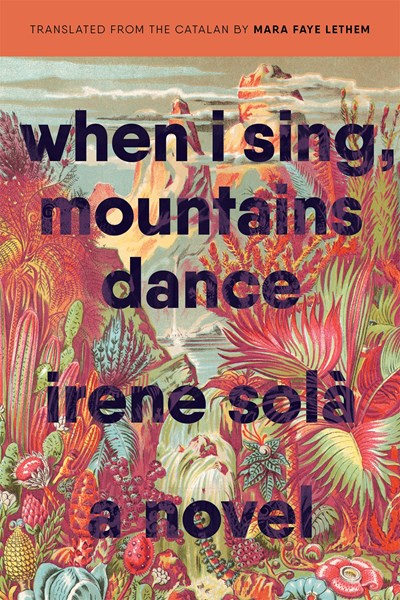 This month, I’ll be judging books by their covers. It may or may not come as a surprise, but as booksellers, we do this all the time. We often find that a pretty face does not always signify a vacuous read; often it’s quite the opposite. Each of the books below hits the sweet spot of gorgeous cover art with great writing behind it.

My main focus will be the book we discussed in our July book club meeting, When I Sing, Mountains Dance by Irene Sola (translated by Mara Faye Lethem). Sola is a Catalan author, poet, and artist whose works have been translated into twenty-three languages. The dizzyingly gorgeous cover art on this book is unattributed on the cover, so I can only assume it is her own.

The book is a rare, beautiful work of magical realism. Every chapter is narrated by a different person, animal, or act of nature. In the opening chapter, a young poet and father, Domenec, is gathering chanterelles near his home in the Pyrenees when he is killed by a bolt of lightning. The account of his death is narrated gleefully by the clouds that sent the fatal blow. Subsequent chapters examine the ripples of this event felt by those who survive him.

The plot, if such a pedestrian word can be used to describe the winding path of the narrative, wanders like a series of switchbacks up a mountain. Births, deaths, betrayals, violence, love, loyalty, and the upheavals of nature are depicted with stunning perspective. The shifting points of view have a Rashomon effect, leaving the reader to decide who is the most reliable narrator. Is it Sio, Domenic’s widow, or Hiliari, their son, or Mia, their daughter? It could be the dead witches who stole Domenec’s mushrooms or the mushrooms themselves. Or the bear who wreaks havoc on the town, the very personification of the savagery of nature and the human world’s impotence against it. Even the geological forces that created the Pyrenees, the plate tectonics that formed the mountains, have a voice in the story, complete with diagrams.

Sola’s prose has the wild poetic sway of flowers in the wind, Mara Faye Lethem’s translation is accessible without stripping away any of the gorgeous imagery. Sio describes one of her children as “a child that comes out of you like a root.” Her father is “Angry as a pair of pliers.” This and other fierce, fearless poetry graces every page. When I Sing, Mountains Dance is a feral howl of a book, a tempestuous hymn to the natural world. Thought-provoking, rich,  and sometimes baffling, Sola’s images will remain indelibly seared in the reader’s mind.

If you’re looking for more great reads with eye-catching covers, check out some of the titles below. 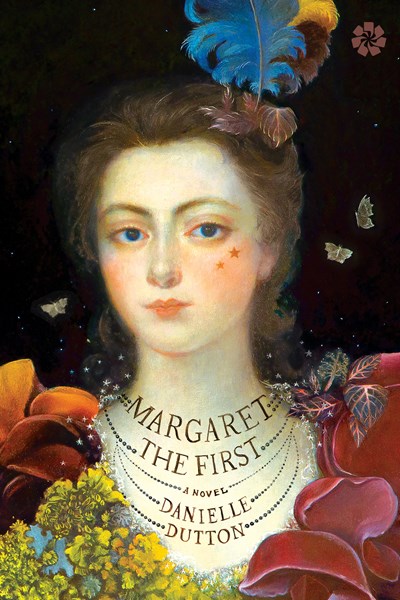 This is a fictionalized biography of Margaret Cavendish, who shocked 17th century Britain with her daring writing and outlandish behavior. Behind the stunning cover (an oil painting by June Glsson) is a miracle of economical, evocative writing. 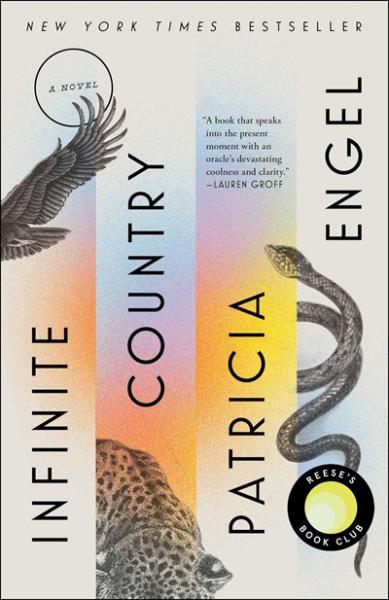 Infinite Country is a miracle of literary economy, a tightly woven basket of a book. A Colombian family is ripped apart by the vagaries of immigration law after fleeing violence in Bogota. With each member of the family pulling at the tenuous threads that bind them, the tension builds to heart-in-your-throat heights. The gleaming cover art of the hardcover edition, with design by Grace Han, brings the beauty and menace of the story into focus. 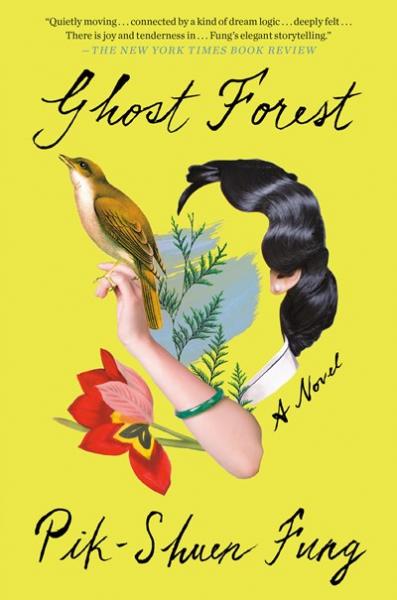 Like a delicate watercolor, with the edges of each chapter bleeding gently into the next, Fung paints the story of a family coming to terms with the death a father. Multiple viewpoints add color to the palette. Donna Cheng’s cover collage beautifully reflects the fractured points of view. 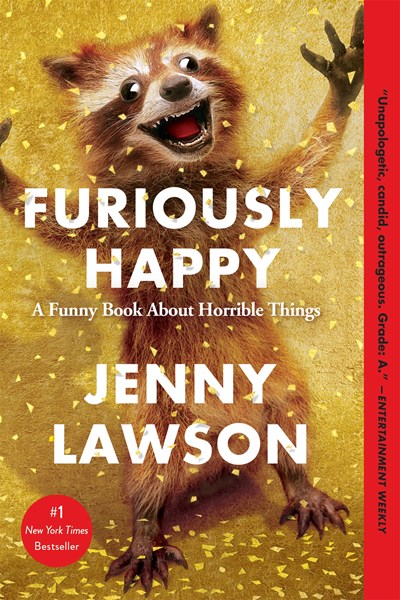 A collection of humorous essays on the hilarious subjects of depression and anxiety. Plus, one of my favorite book covers ever. I just can’t get enough of that joyous raccoon sprinkled in glitter. 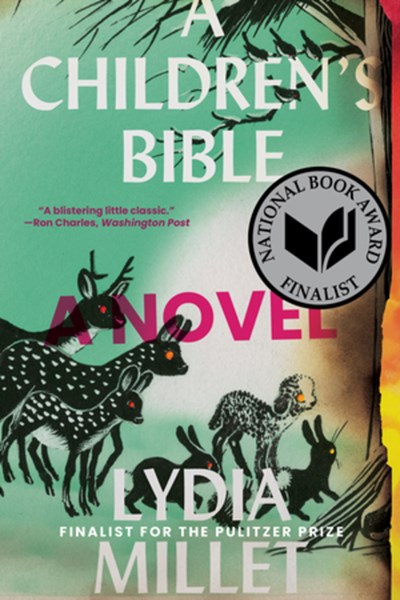 A Children’s Bible by Lydia Millet

A group of children of various ages are left to their own devices while their parents indulge in bouts of drunken debauchery on a group vacation. When an apocalyptic storm hits, the kids’ mettle is tested. A wise commentary on nature, religion, and parenting. David J. High’s cover art is a wry wink to vintage children’s books. 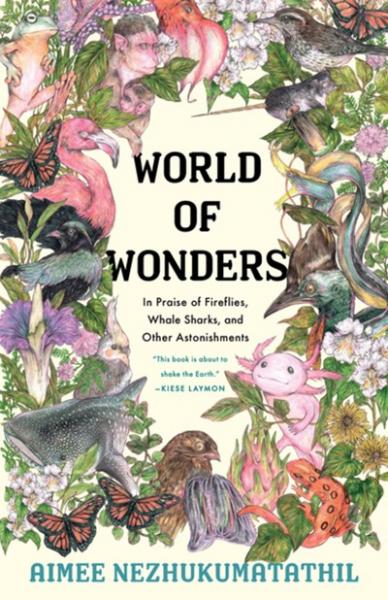 World of Wonders by Amimee Nezhukumatathil

Poets are some of the best nature writers, with keen observational skills and the word-craft to help us to see the world in new and surprising ways. Nezhukumatathil is no exception. This deeply personal collection of short essays is as much autobiography as it is an homage to the the delicacies of the natural world. And the cover, with art by Fumi Mini Nakamura, is framable.` 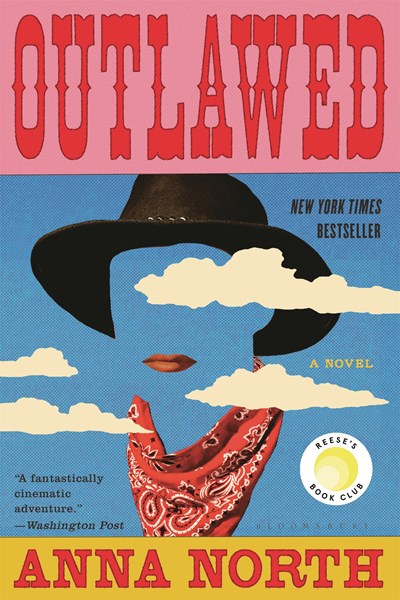 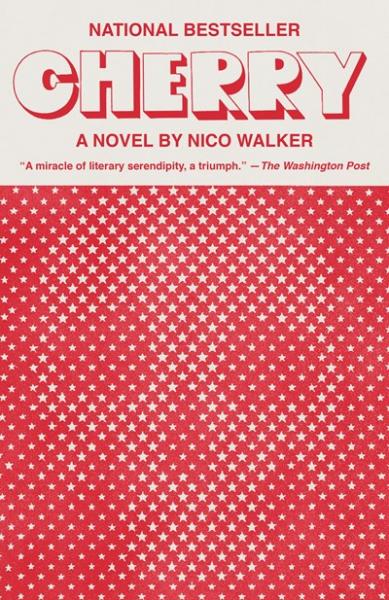 Walker’s gritty semi-autobiographical novel tells the story of a Gulf War veteran whose demons follow him home, then lead him into a nightmare world of addiction and crime on the streets of Cleveland. The subtle cover art by Janet Hansen has a magic-eye quality which compels the reader to gaze deeper.

August is Women in Translation Month. Besides celebrating with my review of When I Sing, Mountains Dance above, I’m dipping back into Maja Haderlap’s Distant Transit for her take on the subject of translation -

is there a zone of darkness between all languages,

a black river that swallows words

and stories and transforms them?

begin to roam, learn to swim,

not lose the memory that nests in

their bodies, a secret nucleus.

will the columbine’s blue be a shade of violet

when it reaches the other side,

and the red bee balm become a pear, cinnamon -

sweet? will my tench be missing a fin

in the light of this new language? will it have to learn

to crawl or to walk upright?

does language know how to draw another toward it

or only how to turn the other one away? can each word,

then, risk the transit, believe itself

invulnerable, dipped in pitch and hard as steel?

Ada Limon has been named US Poet Laureate. Here is a beautiful little gem from her 2021 collection Lucky Wreck -

This darkness is not the scary one,

it’s the one before the sun comes up,

the one you can still breath in.

Alive at the End of the World by Saeed Jones

Saeed Jones’ new collection of poetry is infused with anger, sorrow, and defiance. He tackles systemic racism, homophobia, and the significance of  pop culture in language that often stops the reader in their tracks. Laced through it all is a deep love of humanity and a wry, resigned sense of humor. As relevant as today’s headlines, this is a thoroughly satisfying collection.

The Marriage Portrait by Maggie O’Farrell

O’Farrell solidifies her reputation as one of our best historical fiction writers with this gripping account of the brief life of Lucrezia de’Medici. As with her previous novel, Hamnet, she takes the barest shreds of historical information and creates a fully-fleshed character with aspirations, fears, and flaws. Married at fifteen to Alfonso II, Duke of Ferrara, Lucrezia was dead a year later. It is suspected that Alfonso had a hand in her death. Though very little is known about the real Lucrezia, O’Farrell imbues her character with the relatable traits of a confused, headstrong teenager battling forces bigger than herself. The reader will root for her from the first page to the twist ending.

Click here to read Jessica Sequeira's thoughts on the parallels between translation and music.

Click here to read about the renaissance of experimental writing in American fiction.

When I Sing, Mountains Dance: A Novel (Paperback)

Margaret the First: A Novel (Paperback)

World of Wonders: In Praise of Fireflies, Whale Sharks, and Other Astonishments (Hardcover)

Alive at the End of the World (Paperback)

The Marriage Portrait: A novel (Hardcover)