I am writing this on Cyber Monday, ostensibly the day when everyone goes online to polish off their holiday shopping in one fell swoop. Call this a commercial, call it a public service announcement, call it a heartfelt plea - this month’s blog is a bald-faced exhortation to shop locally. If you are shopping online, please shop at a place that has a storefront in your community. With Covid still raging, we understand and sympathize with the desire to not mingle with large crowds in small stores, but most of the items that are on your list can be purchased online from independent merchants, often right around the corner from you, who are willing to ship. Shopping at the A-word leads to empty storefronts on your main street, less tax revenue in your city, and a crumbling sense of community. Your local merchants work hard to keep their business districts lively, safe, inviting spaces for humans (not algorithms!) to gather. 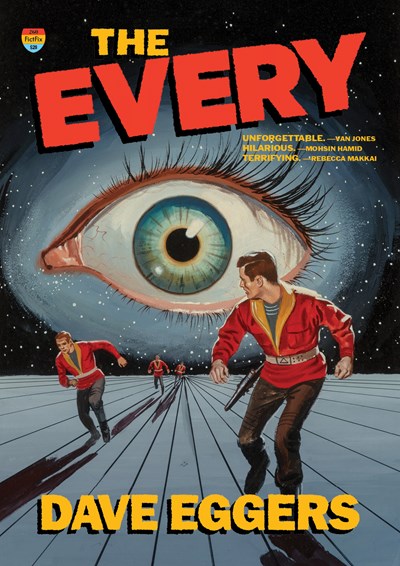 The Every by Dave Eggers

In his prescient 2013 novel, The Circle, Dave Eggers brought us a dystopian near future in which consumers are rated, surveilled, and stalked by a powerful tech corporation, all in the interest of developing marketing algorithms.  Much of what seemed like a futuristic nightmare a mere eight years ago has since come to fruition in the real world.

In his follow-up to The Circle, Eggers raises the stakes and ratchets up the satire. Mae Holland, the bright-eyed young hiree at the Circle, is now head of The Every, a company that has absorbed the Circle and most of the other tech companies in existence, including the one “named after the South American jungle.” Mae has become an enigmatic character. Her name is invoked throughout the novel, but she doesn’t make an actual appearance until the end.

Delaney Wells is an idealistic young rebel and former park ranger whose parents’ mom-and-pop organic grocery was subsumed by Every subsidiary FolkFoods. She decides to wreak her revenge from within the company, securing a job on its B. F. Skinner-esque campus. Her strategy is to develop apps so ludicrous and invasive that they cannot help but be rejected, thus bringing down the corporation. She is assisted by her friend Wes, a “trog” who lives largely off-grid.

The people who live and work on the Every compound are a fragile lot, many of whom have developed a peculiar quiver to their pupils, a side effect of having their every move, word, and intention monitored through an oval worn on their wrists. They wear revealing spandex clothing and stop their work periodically to march in place in accordance with Every fitness standards. Transparency is king; the motto “sharing is caring” takes on a sinister tone.

Eggers takes obvious glee in his depictions of the hyper-woke “snowflakes” inhabiting the campus. At one point, Delaney takes a group of co-workers on a field trip to a beach to witness the mating of elephant seals. Her colleagues rarely go out into the actual nature they claim to revere, so few of them have a clue how to prepare for a simple walk on the beach. The close proximity to wild animals so traumatizes the cloistered group that Delaney is ostracized. To make matters worse, the bus kills a sheep on the way back to the compound, the symbolism of which will elude no-one.

Wes, in an attempt to help Delaney bring down The Every, manages to get himself hired. In a particularly hilarious chapter, the two collaborate on developing a series of apps, each one more ludicrous than the last, to help with everything from “correcting” classic fiction (FictFix) to crowd-sourcing decision-making (ShouldEye).

Delaney receives periodic snail mail from her former professor Dr. Agarwal, who is aware that Delaney is working for The Every, but doesn’t know her intent. Agarwal is the voice of Cassandra, raising the alarm about the damage being done by the corporation and chastising Delaney for being complicit. Delaney cannot respond to the letters, or even admit to their existence for fear of exposure.

The unfortunate upshot of the book is that resistance is futile and we might as well just succumb to our corporate overlords. Eggers takes a grim yet sharply funny view of the dangers of technology and capitalism run amok. The Every is not a perfect book. At times it is predictable, and sometimes Eggers’ delight in parodying the extremely political correct borders on sadistic. But it is a worthy follow-up to The Circle, and an entertaining cautionary tale.

Read on for more on the value of shopping locally - 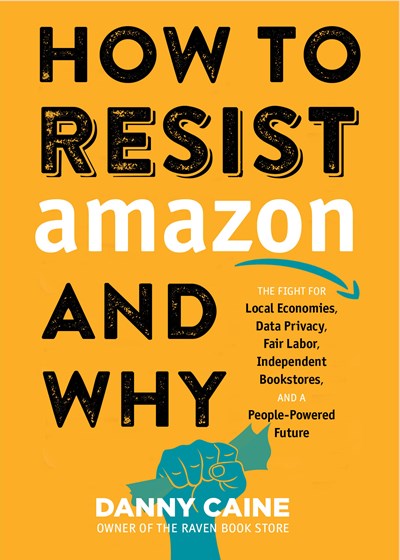 How to Resist Amazon and Why by Danny Caine

With the holidays coming up, the temptation to go online and start clicking to fulfill those gift lists is strong, especially during a pandemic. While you’re doing that, remember that most of of your favorite local merchants have online presences and are happy to ship. And of course there is nothing like the experience of stopping in to a neighborhood store and browsing the shelves, seeing, touching, smelling and often finding treasures you didn’t know you wanted.

Danny Caine’s treatise on the power of shopping locally started out as a broadside, morphed into a zine, and is now a full-fledged book. Caine is the owner of The Raven bookstore in Lawrence, Kansas. In this convincingly argued, well-researched volume, he puts forth a clear argument for the value of keeping your dollars in your community. Locally owned businesses pay local taxes, create local jobs, contribute to local causes, and work hard to keep local business districts vibrant. In particular, local bookstores bring authors in for readings and signings, provide a meeting space for book clubs and community groups, and partner with local cultural organizations. Their value, whether tangible or intangible, is immeasurable. 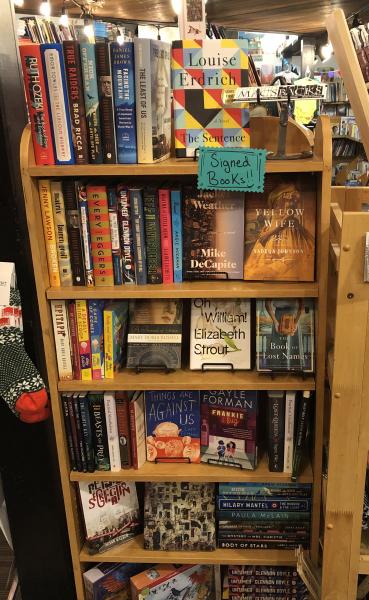 There’s no better gift for the bibliophile on your list than a signed first edition. (Added bonus -  books are easy to wrap!) Here are a few selections from our collection of autographed books -

Mike DeCapite’s semi-autobiographical new novel is a love letter to New York, to food, to music, and to love itself. His largely aimless rambles around the city are documented in short, fragmented observations on the minutiae of life as a middle-aged human in the Big Apple. If Jack Kerouac had not self-destructed, but instead had found comradery and a somewhat restless contentment, he might have written something like this rhapsodic, poetic book. DeCapite’s insights, especially those on mortality, are like a tender nudge to the heart. My favorite one - “Life is a process of being gently shown the door.” It’s honest and gritty, but the grain is like the finest sandpaper.

Things are Against Us by Lucy Ellmann

Ellman, fresh from the nearly 1,000-page rage against the machine that was Ducks, Newburyport, is back with a short collection of essays railing against the stuff, both physical and metaphorical, that gets in the way our happiness. It is a scathing screed against the annoyances of everyday life, covering everything from buttons to misogyny to climate change. Full of bitter humor and biting wit, it’s a cathartic read.

Lauren Groff’s transcendent new novel follows the life of Marie de France, the 12th-century poet and abbess. Marie’s actual identity,  cloaked in the fog of time, is the subject of much speculation among scholars, but Groff imagines her as an intelligent, fierce woman who does not suffer fools gladly. In her story, Eleanor of Aquitaine, with whom Marie has a contentious relationship bordering on friendship, sends her to England to serve as an abbess. The nuns under her leadership are a colorful cast of characters, and are all cogs in the wheel of Marie’s story. This is at its core a female text. There is not a significant male character to be found.  Groff has established herself as a writer of deep intelligence with a canny flair for dissecting the human condition. She does not disappoint here. Matrix is historical fiction of the highest order.

Broken (in The Best Possible Way) by Jenny Lawson

Lawson is back with a collection of essays on the challenges of living while damaged. By turns spit-coffee-through-your-nose funny, righteously angry, and heartbreaking, the writing reveals a truly singular life. This is a person who loses shoes while wearing them, who dreams of adopting rats for the purpose of dressing them up in tiny outfits, who argues with her editor about whether the word “douchecanoe” should be hyphenated, and who struggles with crippling pain and anxiety. Her rant against insurance companies will have anyone who has dealt with a chronic illness standing and cheering. Lawson recognizes and celebrates the awkwardness and the cracked beauty that make us all human.

Hilary Mantel wraps up her Wolf Hall trilogy with this tightly-paced novel about Thomas Cromwell, advisor to Henry VIII. It picks up after the execution of Anne Boleyn and takes us through Cromwell’s execution in 1540. There is treachery in the court, threats from abroad, and the king’s physical and mental health continue to deteriorate. The book is an intricately-woven tapestry of political and romantic machinations, with rich prose and characters that pop off the page.

Lucy Barton is back, and this time she becomes enmeshed in a family drama discovered by her ex-husband, William. William is unstable, and being with him kindles memories and emotions that both had buried after their breakup. Meanwhile, Lucy’s relationship with her daughters becomes more complicated and fraught. Strout has a canny flair for reaching into the fog of memory to gain insight into her characters’ motivations. It’s a gentle and eloquent story, told with a quiet fortitude.

In this compelling new work, Haigh brings a laser focus to the dangers and ordeals that abortion providers and women seeking abortions face on a daily basis. Claudia is a beleaguered counselor at Mercy Street, a clinic in a beaten-down Boston neighborhood. Protestors have been plaguing the clinic for years, wearing on Claudia’s last nerve. Meanwhile, Victor, a troubled Vietnam vet and anti-abortion zealot who runs a dark web woman-shaming site, zeroes in on Mercy Street intent on vengeance. The two stories wind together, tightening like a clock spring. Though the finish is anti-climactic, the book’s value is in its strength of conviction and its nuanced character development. If this novel does nothing else, it will convince doubters that access to safe abortion is health care.

The Nineties:  A Book by Chuck Klosterman

It’s easy to forget, with all that has transpired so far in the 20th century, what a pivotal decade the 90’s were. Culture critic Chuck Klosterman has not forgotten. He takes deep dives into the Clinton impeachment, grunge music, the Unabomber, Zima, Mike Tyson, and a new invention called the Internet. Klosterman is a shrewd commentator, implicitly drawing a though line from the events at the end of the 20th century to their impact on the 21st. There would be no Taylor Swift without Alanis Morissette, no Christine Blasey Ford without Anita Hill. no January 6th insurgents without Timothy McVeigh. Klosterman’s perspective is acute and thoughtful. It’s readable pop culture commentary that doesn’t scrimp on in-depth analysis.

This month's poem comes from one of our local favorites, Steven Smith -

We make stories of fears

through valley of night

Persephone's back in hell

I make my noise

Artist Ai Weiwei has a new memoir out. Click here to read Stephen Mooallem's recent interview with him.

If you're a history buff and an Anglophile like I am, you'll enjoy this article on the rise of literacy in Tudor England.

The Every: A novel (Paperback)

How to Resist Amazon and Why: The Fight for Local Economics, Data Privacy, Fair Labor, Independent Bookstores, and a People-Powered Future! (Real World) (Paperback)

Things Are Against Us (Hardcover)

The Mirror & the Light: A Novel (Wolf Hall Trilogy #3) (Hardcover)

The Nineties: A Book (Hardcover)

1000 Years of Joys and Sorrows: A Memoir (Hardcover)