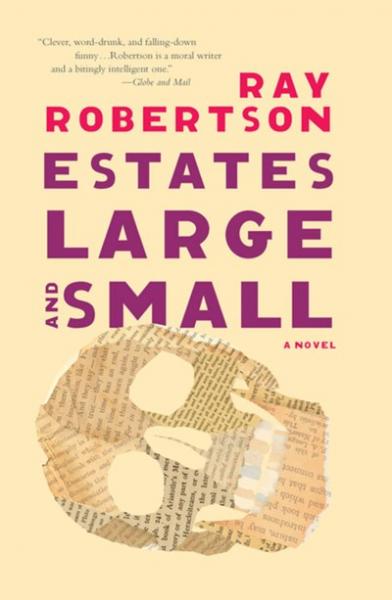 Estates Large and Small will break your heart in the best possible way. Smart, sad, and witty, it’s a rumination on what makes us human and what makes a life worth living. And it is a warm love letter to Toronto and to bookselling.

Phil Cooper’s secondhand bookstore has not survived the pandemic, so he has moved the business online, cataloging and storing stacks and stacks of books in his house and filling a small trickle of online orders with the help of his nephew Benjamin and web designer Cameron. When the the day’s work is done, he smokes a lot of weed and listens to a lot of Grateful Dead.

He takes it upon himself to fill the empty hours with the study of Western philosophy, beginning with the classics. He finds a kindred spirit in Caroline, a woman who contacts Phil offering to sell him her impressive collection of books. The two stoke up a friendship, and are soon spending evenings discussing Nietzsche, Schopenhauer, and Aristotle, fueled by oceans of red wine and copious tokes of Caroline’s medical marijuana. Oh, yes. Caroline is dying of cancer. (Not a spoiler; this is revealed early in the story.)

Caroline’s illness does not get in the way of their relationship, which quickly turns romantic. One day, she makes a difficult request of Phil, which he reluctantly agrees to, and which makes him reexamine his relationships with everyone around him, from loyal customer Zoran, a doleful Serbian immigrant who visits with his pug, to his boorish brother Fred, to his mother, struggling with dementia in a nursing home. In fact, the side characters in this book are so finely etched that you swear you have met every one of them.

But it is Caroline who is the real revelation in this story. Smart, wise, and full of agency, she is in full control of her destiny. Robertson manages a deft tight-rope walk, depicting her as strong and centered while avoiding turning her into some latter-day version of Gone With the Wind’s Melanie Hamilton. She knows what she needs and is not afraid to be brusque to get it. There is not a trace of the maudlin on these pages.

The story has the warmest, most bittersweet ending a reader could wish for. Booksellers, if you can get through the last chapter without sobbing, you might want to check your pulse. I have rarely felt more seen by book. Estates Large and Small does what all good literature should - it makes you feel.

December is the time for “best of” lists, so I couldn’t resist putting together my top ten reads of 2022. These are the books that came out this year that have continued to hold a place in my consciousness, even months after reading them -

This novel about an unscrupulous therapist and the woman bent on his destruction is a head-scratching read - surprising, puzzling, and often archly funny. The author is the most unreliable narrator in a book full of them.

This collection of stories, which focuses on the experiences of older women, is filled with anger, pathos, and pitch-black humor.

Alive at the End of the World by Saeed Jones

Saeed Jones’ poetry collection is infused with anger, sorrow, and defiance. He tackles systemic racism, homophobia, and the significance of  pop culture in language that often stops the reader in their tracks.

The Colony by Audrey Magee

Set in an isolated community on a tiny unnamed island off the coast of Ireland, this compelling novel stitches together issues of art, language, colonialism, love, and betrayal.

This hallucinatory 600+ page novel in verse will toss you around like a load of laundry in a dryer. McCabe writes with the heightened rhythm of centuries of Irish storytellers and poets and sets it all to the music of Mott the Hoople and King Crimson.

Saunders returns to the milieu that he built his career on - quirky, timely, funny, wise short stories. This collection delivers social commentary in the guise of absurdity.

The Wolf Age: The Vikings, the Anglo-Saxons and the Battle for the North Sea Empire by Tore Skeie

Tightly-written, action-packed, and immensely readable, this history covers the late 10th-early 11th centuries in Scandinavia, Britain, and beyond. Skeie’s depictions of the machinations that eventually brought an end to the Viking empire and led to the rise of theocracy are the stuff of great cinema.

When I Sing, Mountains Dance by Irene Sola (translated by Mara Faye Lethem)

This is a rare, beautiful work of magical realism. Every chapter is narrated by a different person, animal, or act of nature. Sola’s prose has the wild poetic sway of flowers in the wind, Mara Faye Lethem’s translation is accessible without stripping away any of the gorgeous imagery.

Night of the Living Rez by Morgan Talty

Raw and stark, but teeming with a desperate compassion,  Morgan Talty’s collection of linked short stories set on a Penobscot reservation is a promising debut.

Now is Not the Time to Panic by Kevin Wilson

Frankie and Zeke are two misfit teens who innocently come together over one summer in the nineties and inadvertently cause a nationwide panic. This sweet coming-of-age story is a commentary on the power of art and how memes went viral before the age of social media.

Ann Trow, AKA Madame Restell was, as the subtitle of this book suggests, “Old New York’s most fabulous, fearless, and infamous abortionist.” Restell was a notorious figure, providing much-needed services to desperate women, becoming ostentatiously wealthy in the process, and frequently running afoul of the law. Wright paints her as a complicated, not always sympathetic character, hardly the image of an angel of salvation swooping down to help a woman in need. Money was important to her, and she made a lot of it. Her relationships with her patients were fraught; she was maternal with some, cold, perfunctory, and sometimes angry with others. The book is thoroughly researched and engagingly written, with a fun, snarky edge to it despite the horrors it depicts. Wright’s impassioned epilogue brings us up to the women’s rights predicament we find ourselves in today, putting a personal spin on it. It’s an urgent call to action in memory of a brave, complex woman.

there comes a time when you stop hoping for

and realize that there is only you—

picking trash from the neighbor’s yard,

hauling jars to the recycle bin,

calling your great-aunt Susan even though

she is just your aunt Susan and

this is not just your godforsaken earth.

It is depressing to know a war is coming.

Worse to know the war will always be in you.

Take comfort in your bold heart

where hope and fear are mingling.

Click here to read an interview with Night of the Living Rez author Morgan Talty.

Alive at the End of the World (Paperback)

The Colony: A Novel (Hardcover)

The Wolf Age: The Vikings, the Anglo-Saxons and the Battle for the North Sea Empire (Paperback)

When I Sing, Mountains Dance: A Novel (Paperback)

Night of the Living Rez (Paperback)

Now Is Not the Time to Panic: A Novel (Hardcover)

And Yet: Poems (Paperback)