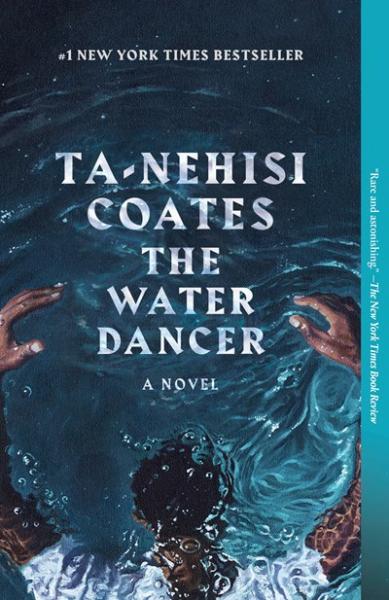 In celebration of Black History Month, the focus is on African and African-American writers. If the events of the past year have taught us anything, it is that the voices of people of color have been ignored, and in many instances, willfully suppressed for far too long. A crucial step in combating systemic racism is to not only read and absorb the words of Black writers, but to actively do the work needed to stand up for racial justice.

Ta-Nehisi Coates is perhaps best known for Between the World and Me, his poetic open letter to his son. Published in 2015, it is more timely now than ever. He followed that book up with We Were Eight Years in Power, about the racist backlash that followed Barack Obama’s presidency. He has also written Marvel’s recent Black Panther and Captain America series.

His debut novel, The Water Dancer, is a sprawling magical-realist saga about the Underground Railroad. It follows Hiram, a slave on a Virginia plantation. His father is the plantation owner; his mother is an almost mythical figure who exists only in Hiram’s dim memory. His relationship with his father is fraught. Howell Walker is bemused by Hiram, preferring him in many ways to his white son, Maynard, a drunkard and bully. Hiram shows unusual gifts, such as photographic recall, that catch the attention of Howell, who trots him out to amuse his party guests. Other, more substantial gifts come to the fore as the story progresses.

Coates rarely uses the words “slave” and “master,” referring to them as “Tasked” and “Quality” instead. This coined nomenclature provides a new slant on the relationship between the races in the Antebellum South. It’s as if he is looking at the division through white eyes, rationalizing one of the darkest chapters in American history as merely transactional.

Hiram is recruited to transport the Tasked on the Underground Railroad by Moses, aka Harriet Tubman, who, in true Marvel comics fashion, has superpowers of Conduction, which it turns out Hiram shares. The Tasked are swept away to freedom via a complex system of bridges, water, green light, and inexplicable magic.

Memory is a crucial component in many of the layers of this multi-tiered novel. Hiram’s memories of his mother, the “water dancer” of the title, drive him. His photographic memory earns him the twisted respect of his father. When he begins his training in Conduction with Tubman, she says to him, “…memory is the chariot, and memory is the way, and memory is the bridge from the curse of slavery to the boon of freedom.”

Coates for the most part spares us grueling depictions of the cruelties of slavery, focusing instead on the personal and psychological damages wrought by the institution. His depictions of the relationships between Whites and Blacks at the time read almost like a caste system, with Quality at the top, low whites somewhere in the middle, and Blacks at the bottom. There are degrees of horror depending on geographical location. The deep south is referred to as hell, and the biggest dread is being sent “Natchez-way.”

The book has as satisfying an ending as can be expected, considering that slavery is still an entrenched institution when the story ends. My only criticism of the book are that it often feels contrived and overly baroque in its plotting. The story could be a little tighter, could move along a a brisker clip. Still, it is an important work, and deserves a spot on the shelf next to the similarly magical-realist work The Underground Railroad by Colson Whitehead.

Here are a few of my favorite books by Black authors -

A Fortune for Your Disaster by Hanif Abdurraqib

A collection of searing, heartbreaking poems by one of the best.

Another Country by James Baldwin

Baldwin’s masterpiece explores sex, politics, and music in the 1970’s.

My Sister the Serial Killer by Oyinkan Braithwaite

A darkly funny novel about a Nigerian woman whose sister has a nasty habit of killing her boyfriends.

The personal and sexual challenges of a millennial living in London. Breezy and angsty.

How Long ’Til Black Future Month by N. K. Jemisin

Science fiction writing at its best. A brilliant collection of short stories with an Afro-futuristic tilt.

A sharp, nuanced story of race, sex, and the complexities of human relationships in the 21st century.

So much is packed into this small volume of essays written during the pandemic. Rich and deeply human, written in Smith’s inimitable voice.

The Hate U Give by Angie Thomas

This timely YA novel about the shooting of a black teenager is a must-read for readers of all ages.

Whitehead’s devastating novel is based on a true story about young men in a reformatory in the 1960’s. You will never see the twist coming at the end.

POEMS OF THE MONTH -

can you hear it?

into the carpet of the library?

energy cannot be created or destroyed,

so ain’t it nonsense to think

that we would ever leave

when you have been our impetus

when you send the rain,

think about it, please,

not get carried away

by the sound of falling water,

on the falling water.

am beneath that water.

It falls with great force

me to the light.

The Final Revival of Opal & Nev by Dawnie Walton

Opal Jewel & Nev Charles are an unlikely pair - an Afro-punk goddess and a ginger Brit singer/songwriter. The two form a seminal duo in the early ’70’s at the dawn of punk. An incident at one of their performances makes them legends but changes the trajectory of their careers. In the present day, a young journalist, the daughter of the band’s drummer,  resurrects their history in search of answers to her own questions. Told through snippets of interviews with Opal, Nev, and the kaleidoscope of people who figured in their lives, it’s a fast paced story, touching on themes of fame, race, and family. Fans of Roddy Doyle’s The Commitments and Zadie Smith’s Swing Time will find much to enjoy here.

The Man Who Lived Underground by Richard Wright

Written at about the same time as Wright’s classics Native Son and Black Boy, The Man Who Lived Underground has only existed in bits and pieces up until now. The harrowing story of a man unjustly accused of murder has now been published in its entirety, along with a poignant, revealing essay about the origins of the novel, “Memories of My Grandmother.” The story itself is, unfortunately, as timely as today’s headlines. Fred Daniels is arrested, tortured, and forced to confess to a crime he did not commit. He escapes into the sewer system of his unnamed city. The twisted narrative is Kafkaesque, packed with irony, tragedy, and outrage. It is a howl against injustice that will stay with the reader long after the last page is turned.

The Beautiful One is gone but not forgotten. Click here to enjoy these Prince songs reimagined as pulp fiction covers

Click here to read author Angie Thomas'  views on the power of youth in the fight for social justice.

The Water Dancer: A Novel (Paperback)

A Fortune for Your Disaster (Paperback)

My Sister, the Serial Killer: A Novel (Paperback)

The Hate U Give (Hardcover)

The Nickel Boys: A Novel (Paperback)

The Man Who Lived Underground: A Novel (Hardcover)