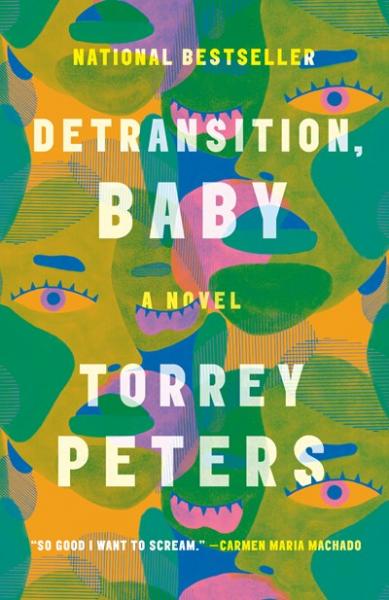 This month - celebrating fiction and poetry by trans writers and the best of recent Black literature. Read on -

Detransition, Baby is, in the best way, a tangled mess of a book. Tackling issues of gender, race, status, and motherhood, it glories in the complexities of living in the 21st century.

Reese is a trans woman with a bad habit of picking the worst men - married, abusive, immature. The last reasonably healthy relationship she had was with her ex, Ames, who was Amy when the two were together. Ames has since detransitioned and is on the verge of fatherhood, as the result of a fling with his boss, Katrina. Feeling unprepared for parenthood, he broaches the possibility of enlisting Reese’s help in raising the child. As may be expected, this idea meets with serious consternation from Reese and Katrina, though motherhood is Reese’s longtime dream. Katrina is unsure that she even wants to go through with the pregnancy.

Peters maneuvers around these complications with the finesse of a figure skater. It would be easy for the reader to pass judgement on any of the characters’ motivations, but Peters writes so many layers of nuance into each of them that we can’t help but empathize and root for them all. Ames wants to be a parent, but not necessarily a father. Reese has taken on a mothering role in the trans community around her, but has doubts about her ability to mother an actual child. Katrina has experienced a miscarriage  in the past, so her trepidation is understandable, even without the baggage of the trio’s unconventional circumstances.

The dialogue sizzles, simmers, and explodes. Arguments escalate to a fever pitch, laced with acerbic humor. When Reese and Katrina enroll in a baby registry at an upscale shop, the descriptions of consumer excess are hilarious. There is an equally side-splitting account of a Tupperware party-like essential oils gathering that includes some next-level mansplaining from a “celebrity acupuncturist.”

Peters has taken what could be viewed by some as a niche subject and made it universal. The book leaves us with more questions than answers, wanting to know more about these complicated characters. The view inside this little  community is warm, compassionate, and fierce, making it relatable on an all-embracing level.

Happy Black History Month! So much great literature by Black authors was released in 2021. Here are some of my favorite reads of last year -

A Litte Devil in America: Notes in Praise of Black Performance by Hanif Abdurraqib

Hands down one of the best books I’ve read in the past several years. Abdurraqib’s collection of essays on Black performance in America is wise, compassionate, deeply thoughtful, and shot through with a profound sense of mourning. My clumsy words are completely inadequate to describe his elegant ones. Just read it.

This blazing debut is loosely based on the case of three young women who spent years in captivity in a Cleveland basement in the early 2000s. Ferrell moves the action to New York in her novel. Told in fragmented bursts by multiple voices, the rage and terror of the victims is laid bare, daring the reader to look away.  A formidable first work from a powerful, singular voice.

On Juneteenth by Annette Gordon-Reed

So much history packed into such a small package! Gordon-Reed gives us a history of Texas told through multiple lenses, including enslaved Blacks, Indigenous people, and her own experience growing up in the Lone Star State. The significance of Juneteenth is clearly and convincingly posited. A little gem.

The Love Songs of W. E. B. DuBois by Honoree Fanonne Jeffers

This colossus of a book is a multi-generational saga that reaches back beyond the history of slavery and conquest and examines the echoes of those institutions in  present day America. This is poet Jeffers’ first novel, and it is an ambitious debut.

My Monticello by Jocelyn Nicole Johnson

A fierce sense of defiance and a yearning for social justice permeates these searing short works. Johnson plays with form and genre with the dexterity of a dancer. My Monticello is a  fast-paced, wholly relevant collection.

Michael Kleber-Diggs’ poems are a scream against injustice and a cry for kindness without barriers. With knife-like precision, this debut challenges us to embrace compassion. (see selection below.)

The Final Revival of Opal & Nev by Dawnie Walton

Opal Jewel & Nev Charles are an unlikely pair - an Afro-punk goddess and a ginger Brit singer/songwriter. The two form a seminal duo in the early ’70’s at the dawn of punk. An incident at one of their performances makes them legends but changes the trajectory of their careers. Told through snippets of interviews with Opal, Nev, and the kaleidoscope of people who figured in their lives, it’s an engaging story, touching on themes of fame, race, and family.

Sharply observed and thoroughly entertaining, this triptych tells the story of a furniture salesman skirting the law to hang onto his business. It is a joyous ode to Harlem. Whitehead’s keen eye for place and nimble use of language is unparalleled, as always.

The Man Who Lived Underground by Richard Wright

Written at about the same time as Wright’s classics Native Son and Black Boy, The Man Who Lived Underground has only existed in bits and pieces up until now. The harrowing story of a man unjustly accused of murder has now been published in its entirety. The story itself is, unfortunately, as timely as today’s headlines. The twisted narrative is Kafkaesque, packed with irony, tragedy, and outrage. It is a howl against injustice that will stay with the reader long after the last page is turned.

Salutations from the Storm

if I’m really the best

person for this body.

nothing at all, unless

you count this ghost, or

this storm. You can see

my haunt in the tired

eyes. In the limbs struck

as you assume you know

what this body holds—

which is never me

which may never be me.

with someone else in it.

I just want to see it happy.

Source of My Confidence

I open every window I have

a joyous child. My neighbor battens

down for an imminent storm.

She winds in her awnings. She won’t

water her garden. This continues

for more than a week. Every day

we have the same conversation.

Get ready, she says,

I feel it in my bones.

I usually respond with mathematics.

They don’t know, she says, they don’t

the smallest violence. I fill

a watering can near to overflowing.

I stand in her dark yard and minister

to her flowers. A gentle wind

The ground opens up and envelopes me

Each time I go out to walk the dog.

Or the broad edged silly music the wind

Things have come to that.

And now, each night I count the stars.

And each night I get the same number.

And when they will not come to be counted,

I count the holes they leave.

And then last night I tiptoed up

To my daughter's room and heard her

Talking to someone, and when I opened

The door, there was no one there...

Only she on her knees, peeking into

Her own clasped hands.

The intersection between music and science has been documented frequently, but rarely with as much poetic sensibility as in Natalie Hodges’ debut. Hodges examines music from two perspectives - that of a former concert violinist and that of a seeker into the mysteries of quantum physics and neuroscience. This is not a scientific “how music works” text, but rather a way of trying to define the physics behind how music flows in  the individual musician, within a musical ensemble, and between musicians and dancers. Hodges, who is half Korean, fearlessly relates her growth as a musician, spurred on by her mother, who put aside her own musical aspirations to focus on her children. In her explanation of the “tiger mom” stereotype, she strikes a fine balance between defense and debunking. Chapters on the mysteries of improvisation and on the magnetic connection between tango dancers show a writer with a breathless sense of wonder and a firm commitment to her arts, both literary and musical.

Published in partnership with the literary radio show Selected Shorts, this eclectic collection features an all-star cast of authors, including Edwige Danticat, Dave Eggers, Lauren Groff, Carmen Maria Machado, and many more. The stores range from dystopian futurism to family drama to surrealism, so there’s something for everyone here. Namwali Serpell writes of a pandemic world in which people lose their noses. Luis Alberto Urrea’s fictionalized reminiscence of riding in a bread truck with his father is as warm as their wares. Jess Walter’s updated take on the noir trope of the beautiful but troubled woman hiring a hard-boiled detective is spot-on. Small Odysseys is a rich and varied sampling of some of today’s best writers.

If you're as big a Jeopardy geek as I am, you were awestruck by Amy Schneider's 40 day run. Click here to read Jennifer Finney Boylan's article on the "radical normalcy" of Schneider's participation in the game.

Mac's Backs had the pleasure of co-hosting an event with writer and culture critic Lucy Sante recently. Click here to read about her transition and growth as a trans woman.

We mourn the passing of the inimitable bell hooks in December. Click here to read Niela Orr's tribute to her.

The spectre of book-banning has been rearing its head in recent months. Click here to read about a group of women of color fighting book-banning in their home state of Texas.

A Little Devil in America: Notes in Praise of Black Performance (Hardcover)

The Man Who Lived Underground: A Novel (Hardcover)

Uncommon Measure: A Journey Through Music, Performance, and the Science of Time (Paperback)