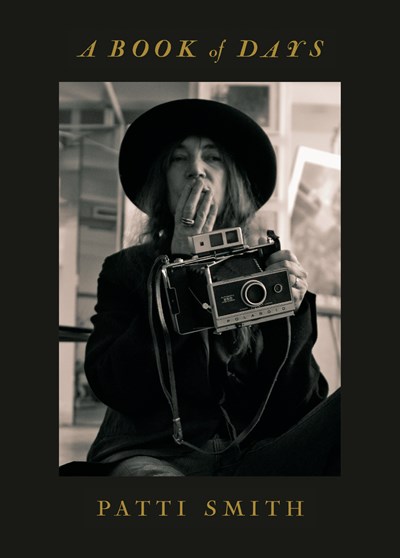 Happy New Year! Time to take down the old calendar and put up the new. If you're one of those who love the feeling of accomplishment that comes with peeling back the leaves of a page-a-day calendar, or the comfort of reading the daily entries in a book of meditations, you will love Patti Smith's new offering.

In A Book of Days, Smith has taken the concept of the devotional and performed the magic of making it both deeply personal and accessibly global. Each of the 366 entries (she includes Leap Day) consists of a photo, either archival or taken by Smith herself, and a brief commentary on it.

Smith is the ultimate multi-hyphenate — musician-memoirist-poet-photographer-activist. (You could even add Instagram influencer in there, but that feels too trivial a label for her work.) She has grown from the skinny punk poet that she was in the ’60’s and ’70’s to the wise, empathetic crone so admired by generations of followers. Smith’s work has always had a restless, searching quality, forward-looking yet imbued with with a misty nostalgia.

A Book of Days celebrates the mundane and the monumental, giving meaning to the smallest, most fleeting moments in life. Grainy Polaroids of a coffee cup, a chair, the back of a hand, share space with archival photos of Greta Thunberg, Elvis Presley, John Coltrane, Yoko Ono, and others.

Smith used Polaroid film until it was discontinued, then began observing the world through her cell phone, at first reluctantly, then enthusiastically. Her perspective has an ephemeral delicacy about it. Many of the photos have the feel of something glimpsed out of the corner of the eye, there and then gone in a blink.

Friends and family are a major theme in many of the photos. She pays tribute to past loves Robert Mapplethorpe and Sam Shepard. Her loving shots of her daughter Jesse and son Jackson, and her wistful memories of her late husband Fred “Sonic” Smith make us feel as though we have met these people and are as invested in their lives as she is.

But the most evocative photos are the still lifes. The repeated motifs of coffee cups, typewriters, and books, arranged as if on an altar with soft light caressing them, gives these simple objects profound meaning. A pair of worn boots, a bed against a bare wall, a tangle of foot pedal cords, pull us irresistibly into her world. She gives an almost painful intimacy to the most ordinary things. Indeed, these photographs, with their often haiku-like captions, in many ways tell us more about her life than her various memoirs.

Smith has a compassionate, non-judgmental view of humanity, and it is a warm escape to be able to see the world through her clear, insightful eyes.

This beautiful volume is a tribute to photographer Robert Mapplethorpe, released 7 years after his death. Smith’s allegory of a dying man reflecting on his life while on a journey to see the Southern Cross is interspersed with Mapplethorpe’s elegantly spare photos. (I am privileged to own an inscribed first edition. It is the first thing I am rescuing if my house ever catches on fire.)

This slim little treasure combines poetry, photography, parable, and travelogue. Tying it all together is the theme of the often obsessive nature of devoting oneself to one’s art.

This is the book that elevated Smith from punk poet to universally acclaimed writer. It is the intimate and atmospheric reminiscence of her life with Mapplethorpe that garnered her the National Book Award. The iconic Joan Didion blurbed it with these words - “This book is so honest and pure as to count as a true rapture.”

Year of the Monkey

In 2016, after a series of New Year’s concerts, Smith took time off to do some solo traveling. This is her account of an often turbulent year and her reflections of her life up to that point. The text is enhanced with Smith’s  evocative Polaroids.

Rose’s feminist take on Smith’s work examines the artist’s significance, not just to the music, poetry, and art worlds, but to culture overall. Writing from  the perspective of an obvious fan, she defends Smith against misogynist and ageist culture critics, yet doesn’t shy away from questioning her feminist cred and criticizing her past use of racial slurs. Smith has never owned the feminist banner, yet has lived feminism in her self-determination and professional agency. Rose shows Smith as an artist who has always played a key role in determining the zeitgeist, ever evolving, never resting on her laurels.

Shaw takes an academic approach to this deep dive into Smith’s first and most iconic album. He discusses the events in Smith’s life that led up to the creation of a work that dramatically changed the musical landscape at the time and altered the way that female musicians were viewed. While Shaw, a specialist in 19th-century literature and critical theory, often gets bogged down in academic-speak, sometimes connecting dots that aren’t there, this small volume contains many valuable insights into Smith’s life and early work.

as a daughter’s circlet

dragged across a window

not seen through again

There is blood everywhere

drained of its blood color

And the face of love is nothing

but the whiteness of winter

the fir and the pine

the fawn and the horn

And yet we long

~ from Devotion (Why I Write) by Patti Smith

Lots of good books are coming out in February! Here are a few previews -

The Applicant by Nazli Koca

Layla is a young Turkish woman studying in Berlin in 2017. She has failed her thesis, and is clawing her way through ossified strata of bureaucracy to keep her student visa. She spends her days working as a cleaner in a hostel and her nights snorting ketamine, drinking, and having casual sex. The book is a needle-sharp look at the plight of immigrants in Europe. It is smart and incisive, with prose that is lean and hungry in its desperation. Koca calls out the hypocrisies and xenophobia that immigrants face every day, forcing them to compromise their very existence. Her keen wit and biting, righteous anger jumps off of every page. It’s a brilliant debut by an author worth watching.

This gorgeous anthology of lyrical nature writing employs the device of using a physical object as a jumping-off point for rumination on the Black experience in the natural world. There is some truly exquisite writing here from authors and poets such as Sean Hill, Michael Kleber-Diggs, and Naima Penniman. Ama Codjoe’s commentary on a photograph of a young girl taken at a civil rights protest in the ’60’s becomes a reflection on rain, hair, and the ongoing struggle for social justice. Kleber-Diggs writes elegiacally of his grandparents’ Wichita garden and his memories of fishing with his grandfather. Editor Erin Sharkey uses a 1765 almanac as a springboard for a poetic commentary on the often fraught relationship between Black folks and their historically perceived place in green spaces. It’s a rich collection, a beautiful meshing of comfort, righteous anger, and longing.

Kit Crockett, a Cherokee girl in New Orleans, is scraping to hold together the scraps of her family. Her mother has died, her father is lost in grief and spurts of anger. She escapes into her friendship with a beautiful, enigmatic woman who moves in down the road. Her world is changed and expanded, but not always for the better. A chain of tragic events leads to Kit being sent to a religious boarding school, where she and other Native children have their culture stripped away and are subjected to indoctrination and sexual abuse. The resourceful, strong-willed girl finds ways to survive and fight back against her oppressors. In Kit, Verble (When Two Feathers Fell From the Sky) has created an unforgettable child character with a sharply observant, fiercely direct voice. She will go down as the literary sister of True Grit’s Mattie Ross and Peace Like a River’s Swede Land.

Click here to read a recent interview with Patti Smith on what drives her creativity.

Click here to read about the truths that writers can learn from musicians.

A Book of Days (Hardcover)

Devotion (Why I Write) (Paperback)

Year of the Monkey (Paperback)