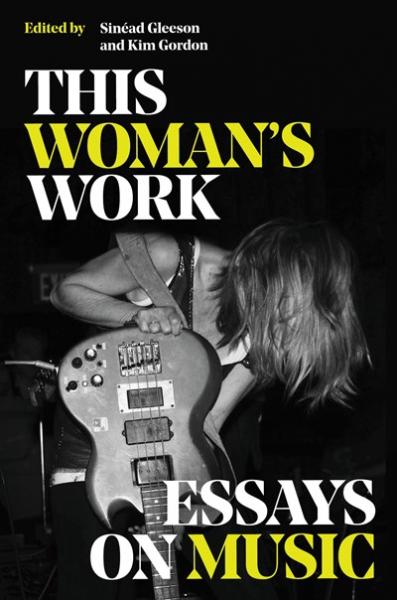 There are two quotes about music that persist, despite all efforts to debunk them - 1. “Writing about music is like dancing about architecture,” a timeworn witticism that has been attributed to everyone from William S. Burroughs to Frank Zappa. 2. “Music is a universal language.” While holes can be punched in both of these statements, (and space and time considerations prevent me from getting out my hole-puncher), it can be asserted that music exists in part because not everything can be put into words. Music picks up where words leave off.

A lot of great music writing has crossed my path since I last covered the subject in November of 2020. The diversity of viewpoints is as wide as the subject itself, spanning Western classical to rap to country to noise to jazz and beyond. These writers have the whole dancing about architecture thing down.

This Woman’s Work: Essays on Music (Hachette 2022), edited by Sinead Gleeson and Kim Gordon, explores the work of a sixteen women writers. Some of the names, such as Maggie Nelson (Bluets, On Freedom), Margo Jefferson (Negroland, On Michael Jackson), and Otessa Moshfegh (Eileen, My Year of Rest and Relaxation)  will be familiar to readers. Others will be happy discoveries for the uninitiated. Anne Enright’s essay on Laurie Anderson is delightful in its erudite fangirling. Liz Pelly gives Agnes “Sis” Cunningham, who was active in the political music of the 30’s-50’s, her long overdue props. Editor Gleeson gives us an insightful bio of electronic music pioneer Wendy Carlos. And Moshfegh’s gorgeous paean to the piano teacher of her youth is a testament to the value of a great educator. it’s a well-curated collection, covering a wide breadth of genres and writing styles.

(**BONUS TRACK** - The First Collection of Criticism by a Living Female Rock Critic (MCD x FSG Originals, 2021) by Jessica Hopper - This revised and expanded edition or Hopper’s 2015 collection, with a foreword by Samantha Irby, shows the journalist to be as fiercely feminist as ever, smashing the patriarchy one article at a time. Included are reviews of and interviews with Lady Gaga, Janelle Monae, MIA, Bjork, and many others.)

In Long Players: Writers on the Albums that Shaped Them (Bloomsbury, 2021), editor Tom Gatti invites an all-star cast of authors to write 2-3 pages on one album that affected their lives. The roster of contributors reads like a Booker long list; George Saunders, Bernardine Evaristo, Olivia Laing, Colm Toibin, Marlon James, and many more give us a peek into their record collections and their formative years. Of course Neil Gaiman chooses a Bowie album, but it’s not the one you’d expect. George Saunders’s dry, wry wit is in full force in his essay about Fragile by Yes. “The lyrics were odd and poetic, as if the goal was to sound a certain way rather than to say a certain something…..’Mountains come out of the sky and they stand there.’ Yes, they do, sort of, don’t they? thought my 1974 self.” Patricia Lockwood’s poetic description of Elizabeth Frazer’s voice on This Mortal Coil’s It’ll End in Tears says everything I’ve never been able to put into words about this remarkable instrument. The collection is a great jumping-off point for musical exploration and a reminder of what we loved about the music we grew up with, whatever the era or genre.

(**BONUS TRACK** - The 33 1/3 series (Bloomsbury Academic, various titles) - Each of these little gems is a deep dive into and album or an aspect of a particular artist’s work, running the gamut from Elvis to Aretha to Bowie to Kendrick. Check out Cleveland’s own Annie Zaleski’s take on Duran Duran’s Rio (#156 in the series.))

Ted Gioia’s Music: A Subversive History (Basic Books, 2019) is a sweeping volume that takes us from pre-history (literally beginning with the Big Bang) to the present, presenting music history through the lens of the social systems that created it. He looks at early uses of music in ritual, music’s impact on human evolution, and how universals in music developed. (As a student of ethnomusicology, I quibble with the concept of music as a “universal language,” but am on board with the notion that there are aspects of music that span cultures.) His chapter on Sappho and Pythagoras, who were contemporaries, examines the compatibilities of magic and mathematics in music. He looks at the impact that audiences have on music-making, and delves into the history of the music business from the angles of composers, publishers, and stars. (An interesting factoid - Zildjian, the maker of cymbals, was founded in Instanbul in 1623 and the company, now based in Massachusetts, is still run by the family who founded it.) Some of the most amusing and horrifying stories are those of bad behavior on the part of composers and musicians, from Gesualdo to Beethoven to Sid Vicious, which span the gamut from hissy-fit all the way up to murder. He looks deeply at how Black musicians have historically gotten short shrift in appreciation of their work, which has historically been co-opted by white counterparts. He investigates how technology has changed the way people consume music, from player pianos to Spotify. The book is packed with information, copiously researched, and entertaining. It is the history text that I wish I had when I was a music major.

(**BONUS TRACK** - Music is History (Abrams Image, 2021) by Questlove - ) Questlove’s year-by year personal take on the popular music of 1971 to the present is a smart, witty glimpse into his own musical growth paralleled by the growing pains that the country has gone through in the last 50 years. Themed playlists sprinkled between chapters provide fodder for further exploration. A fun, relevant read.)

Stuart Isacoff’s 2011 book A Natural History of the Piano was a must-read for pianists and anyone interested in the science behind how the instrument developed. His new book, Musical Revolutions (Knopf, 2022), is an ambitious history told through the upheavals in Western music that have occurred since the middle ages, the sea changes that impacted everything that ensued. He covers the codifying of music notation, the birth of opera, the social impact of jazz, the growth of experimental music, and much more. This is a solid text for a layperson looking for rabbit-holes to jump into. Though at times Isacoff’s tone can be a bit stodgy (the chapter, late in the book, on women in music is just short of condescending) and much has been elided, presumably for brevity, the book is well-researched and readable. As with Alex Ross’s (The Rest is Noise) work, it is erudite and entertaining without getting bogged down in jargon.

(**BONUS TRACK - A Little Devil in America: In Praise of Black Performance (Random House, 20220) by Hanif Abdurraqib. Hands down one of the best books I’ve read on any subject in the past several years. Abdurraqib’s collection of essays on Black performance in America is wise, compassionate, deeply thoughtful, and shot through with a profound sense of mourning.)

Steve Reich’s compositions have had an indelible impact on the world of new music. His work has been championed by and has influenced such artists as Bang on a Can, So Percussion, Johnny Greenwood, and Brian Eno. Conversations (Hanover Square Press, 2022) invites us to be a fly on the wall as Reich chats with collaborators and acolytes. Most of the  conversations took place via Zoom in  2020 and 2021, and skew toward analysis of Reich’s music, with its myriad performance challenges. He speaks with composers David Lang, Michael Gordon, Julia Wolfe, Stephen Sondheim, Nico Muhly, as well as other musicians and artists. The book is an enlightening, prismatic view of a rare, prolific talent and a giant of contemporary music.

when your voice reaches my ear,

awake, my ears’ limbs pulls you to me,

to catch in the depths of your breath

the familiar tremor that is now fading

and was at the beginning our prelude.

in a flash, my words fly up, swollen into an

orchestra, every sentence a

promise, an appassionata, wanting to be more

than merely said. enter my ear,

here you will be welcomed magna voce,

seen with all senses! even your

farewell is a bright chord, a

tender coda with a ritardando ring.

Never say it’s too late to not only try something new, but to knock it out of the park. Jane Campbell is 80 years old and this is her first book. The collection of stories, which focuses on the experiences of older women, is filled with anger, pathos, and pitch-black humor. These are women who are living and dying on their own terms. The indignities and infirmities of age are no match for these vivid characters, whose passions, intellects, and libidos are working just fine, thank you very much. Each character is fiercely independent, fighting against physical limitations and societal expectations to maintain her dignity and autonomy. Readers will find a lot to chew over in these dark, provocative stories.

Click here to read about and early writing/music mash-up - a typewriter with a piano keyboard.

We were dismayed but not surprised by the Supreme Court's decision to overturn Roe v. Wade. Here's a list of some books that bring perspective to the issue.

Mary Shelley, the author of Frankenstein, writes eloquently about reproductive freedom in the nineteenth century. Click here to read.

The echoes of the SCOTUS decision have been heard around the world. Click here to read international writers' responses.

The First Collection of Criticism by a Living Female Rock Critic: Revised and Expanded Edition (Paperback)

Long Players: Writers on the Albums that Shaped Them (Hardcover)

Musical Revolutions: How the Sounds of the Western World Changed (Hardcover)

A Little Devil in America: In Praise of Black Performance (Paperback)