No theme this month, just a bunch of books that I have enjoyed over the past few years. Plus, a guest writer this month!! Scroll down to read our intern Max Carroll's review of Monk! 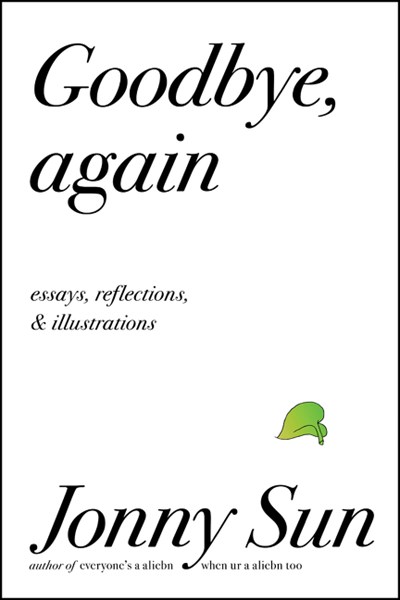 A couple of months ago, I did a preview of Jonny Sun’s new book of essays Goodbye, Again. The book has not let go of my heart since I first read it. At the time I wrote that the book is “a balm for the rawness of life in the 2020s.” Here’s a more in-depth look at it:

Jonny Sun is best known for his graphic novel, everyone’s a aliebn when ur a aliebn too and for his sweet illustrations in Lin-Manuel Miranda’s Gmorning, Gnight!, as well as his writing for the Netflix series Bojack Horseman (one of my favorite animated series!) This is his first collection of essays. It is tender, sad, and funny and just the antidote to the world today.

The selections range in length from two sentences to several pages. Sun writes candidly but with a sense of centeredness about his depression and anxiety and gives gentle, empathetic advice to others experiencing the same challenges. His pearls of wisdom could not be simpler and more attainable - e.g. “Don’t tell yourself ‘don’t worry,’ but just …worry smaller.” and “If happiness visits, let yourself let it in…. And when it wants to leave, let it leave…. it has to leave in order for it to visit again.”

But don’t let the simplicity of Sun’s advice fool you into thinking this is a book of New Age fluff. There is genuine depth and wisdom drawn from a life of struggle against the constant pressure to be productive. Sun grew up in the huge, bustling Asian community in Toronto, and veered off from a career in architecture to focus on the arts. He writes compassionately about helping his family come to grips with this decision.

His Proustian chapter on scrambled eggs is like a mini-autobiography, with each egg recipe drawing on memories from his life. He manages to be meditative, funny, and wise, all while giving practical cooking instructions. His chapters on plant care are sly metaphors for self-care.

It would not be a Jonny Sun book without his spare line drawings. They have the rough, hasty quality of an artist’s sketch book but are perfectly placed to enhance the essays. Sun gives us tools for coping with the messiness of modern life with sweetness and heart.

Hi, I’m Max! I’m not a regular employee at the store, and I am definitely not Grace. I’m a student at Shaker who worked at Mac’s Backs for my senior project (yes, Max at Mac’s Backs). I hope you enjoy my review!

Monk!: Thelonious, Pannonica, and the Friendship Behind a Musical Revolution by Youssef Daoudi

People love to diss jazz. When a snobby high school student hears someone play a wrong note in the band, they’ll jokingly say “that’s jazz.” After all, jazz is all improvising, right? The musicians are just making stuff up as they go, right? It’s not like they have to practice, any half-decent musician could do what they do, right? Anyone who’s really listened to or played jazz knows that those are silly questions, and it’s clear that Youssef Daoudi knows that too. This is reflected in his beautifully illustrated, meticulously researched graphic novel MONK!

MONK! is a book about the life of Thelonious Sphere Monk, one of the greatest pianists to walk the earth, and Pannonica de Koenigswarter, otherwise known as the jazz baroness for her ceaseless patronage of the art. The novel follows both their lives, initially in two different storylines, but once they meet at one of Monk’s Paris concerts in 1954, their lives become inexorably linked. While Monk was certainly a genius, he often made poor life choices and was also notoriously difficult to work with, to the point where Miles Davis asked him to not play on his solos (usually, the pianist provides supporting harmony to horn soloists). Pannonica served as a kind of guardian for Monk and various other jazz musicians, allowing them to stay at her place when they needed somewhere to crash or renting hotel rooms to host jam sessions. Her support allowed Monk to thrive.

It’s hard to put the novel down. Daoudi switches between enthralling dialogue and dynamic action that makes you feel like you’re right in the middle of the hottest club in the jazz scene. One of my favorite techniques employed by Daoudi is his flowing graphics, with sound effects and other visuals reaching across panels and sometimes even across the page. I feel the visuals connect to the story of Monk perfectly -- often unconventional and certainly not always what you expect, but clearly the result of years and years of practice. Another one of my favorite aspects of the book is how it discusses Monk’s album covers. Thelonious was famous for having a highly unorthodox personality, from his playing to his composing, and his album covers weren’t an exception. Upon seeing the covers, I had to stop and pull out my phone, thinking “is this really on the album?” And yes, each cover Daoudi draws is faithfully reproduced.

All in all, MONK! is an excellent read. This fresh take on an important part of jazz history is essential for any music enthusiast or graphic novel fan, but I think this book’s engaging visuals and compelling story could reach anyone. - Max Carroll

I revisited my fiction bookshelf recently and had my memory jogged in  a good way by these titles. Hmmm. Might be time for a re-read.

The title character is a Jamaican British woman living in London, navigating the hazards of relationships. Carty-Williams manages to make Queenie’s story endearing and cringe-worthy at the same time.

High school theater students survive the machinations of their Svengalian teacher and the awkwardness of the teen condition. There is a twist in the plot about halfway through that you will never see coming.

A collection of loosely related stories, all based in the Sunshine State. Groff’s inimitable, intelligent voice brings out the humanity in her diverse cast of characters.

Vivian is a lost soul and the most unreliable of narrators. She wanders the streets of Dublin, looking for a place to fit in. The reader’s heart will ache for this lonely, socially awkward human.

A Children’s Bible by Lydia Millet -

This National Book Award finalist was our book club selection last month. A group of children of various ages are left to their own devices while their parents indulge in bouts of drunken debauchery on a group vacation. When an apocalyptic storm hits, the kids’ mettle is tested. A wise commentary on nature, religion, and parenting.

Dept. of Speculation by Jenny Offill -

Offill’s spare, fractured prose is the perfect vehicle for this story of a couple whose marriage is in danger of dissolving. Written with wit and an arch sense of compassion.

A fictionalized account of the Jonestown tragedy, this book takes a deep dive into the mind of a young woman seduced into Jim Jones’ cult. A cautionary tale about the dangerous appeal of a charismatic man.

The Thousand Crimes of Ming Tsu by Tom Lin

This debut is a brilliant blend of classic Western revenge story and edge-of-your-seat thriller, mixed with a little magical realism. Ming Tsu is on a mission to wreak vengeance on the men who kidnapped his wife, the daughter of a railroad magnate. He is accompanied by a blind man known only as “the prophet,” whose talent for clairvoyance proves a blessing and a curse on their journey. Along the way, they team up with performers from a traveling circus, some of whom have actual magical powers. The characters are colorful and the writing is as sharp as the railroad spike Ming uses to finish off his foes. (The irony of his weapon of choice will be lost on no one.) Trigger warning - there are Tarantino-level rivers of blood gushing though every page. Not for the faint-hearted, but a riveting read.

This searing debut is loosely based on the case of three young women who spent years in captivity in a Cleveland basement in the early 2000s. Ferrell moves the action to New York City, but keeps the horror and grief intact. Told in fragmented bursts by multiple voices, the rage and terror of the victims is laid bare, daring the reader to look away. While fragile redemption is achieved, it is weak tea in the face of the abuses endured. A formidable first novel from a powerful, singular voice.

In honor of Pride Month, here are two poems by one of the fiercest voices in queer literature, Audre Lorde -

We were born in a poor time

Now we raise our children

as well as each other.

Now you have made loneliness

and no longer needed

but I want you

Spring is the harshest

Blurring the lines of choice

Swallows up all decision.

I remember after the harvest was over

When the thick sheaves were gone

And the bones of the gaunt trees

How the dying of autumn was too easy

To solve our loving.

Alison Bechdel has a new book out! Click here to read her views on writing beyond language.

Monk!: Thelonious, Pannonica, and the Friendship Behind a Musical Revolution (Hardcover)