Happy Women's History Month! There have been so many great books by women released in the past few years that it would break our website to try to list them all. Instead, I'll list some of my favorite fiction, graphic novels, and essays. 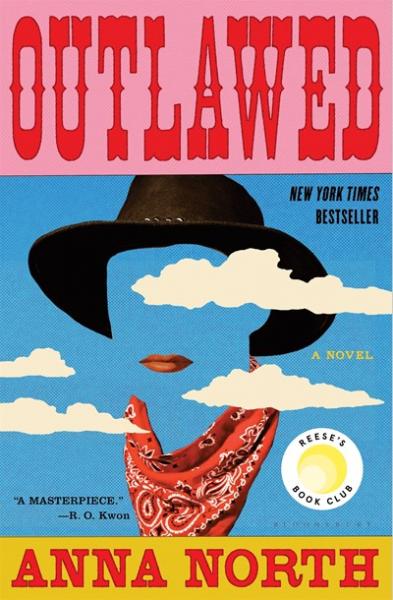 Ada is living in an alternate Old West, where women are mandated to bear children at peril of being hanged as witches. Her mother, the capable town midwife, has trained Ada in all manner of frontier medicine. She speaks frankly to her and her patients about sex and sexuality. Ada marries at seventeen, but a year later, still hasn’t conceived. In order to save her life, she flees to a convent, the only acceptable place for a barren woman. The mother superior recognizes Ada’s craving to learn more about midwifery and the causes of barrenness. Realizing that she can’t scratch Ada’s itch for knowledge, she sends her off to Hole in the Wall, a community of outlaws led by a mysterious character known only as The Kid. Ada is cautiously welcomed into the gang, a quirky assortment of mostly women and non-binary people. She learns to ride, shoot, and rob banks, all the while patching up bullet holes and knife wounds, earning her the nickname “Doc.” She becomes involved in a convoluted plan to commit high larceny in the service of building a new utopia for the gang.

The book moves along at a gallop, picking up plot points and throwing them down like a spent six-shooter. She paints a vivid picture of the Western landscape, and has obviously done copious research on frontier medicine. While the book has been compared to The Handmaid’s Tale, North applies a lighter touch to her dystopia than Atwood does. There is a rakish, devil-may-care attitude that runs through many of the characters, though each has their individual demons. Still, pluck wins the day. The book has more of an air of adventure and escape than impending doom. It is high-level entertainment, never taking itself too seriously. It all leads to a cautiously optimistic finish, rather than the doom, hopelessness, or heart-crunching cliff-hangers of many dystopian novels.

Here’s a list of a few of my all-time favorite books by women, including some that were formative to my early reading life -

Little Women by Louisa May Alcott

Of course I wanted to be Jo. What book nerd didn’t?

I loved the bleak darkness of the landscape and the tenacity of the heroine. One of my early feminist idols.

Hyperbole and a Half by Allie Brosh

The funniest, most heartbreaking book about depression you’ll ever read.

Slouching Towards Bethlehem by Joan Didion

A collection of essays in Didion’s dry, detached style. She exposes the dark underbelly of society in sunny California in the sixties

A Visit From the Goon Squad by Jennifer Egan

An atmospheric, pulsating novel about the passions and politics of the music business.

Over a thousand pages, almost all of which is a single sentence. An unputdownable rant in which our narrator streams a running commentary on small-town life, marriage, gun violence, and the rise of hate in Trump's America.

Harriet the Spy by Louise Fitzhugh

What reader has read this book and not immediately grabbed a notebook and pencil and started stalking people?

A collection of humorous essays on the hilarious subjects of depression and anxiety. Plus, one of my favorite book covers ever. (See the preview of Lawson’s new book below.)

A Wrinkle in Time by Madeline L’Engel

So much heart and magic in these pages! Meg’s bravery has been an inspiration to readers since 1963.

The story of the machinations and intrigue in the court of Henry VIII as told through the eyes of Thomas Cromwell. Characters pop off the page, and the treachery is as thick as porridge.

The Bluest Eye by Toni Morrison

Morrison’s debut novel won a well-deserved Pulitzer. It’s an unflinching look at the damages wrought by racism and colorism.

My Year of Rest and Relaxation by Otessah Moshfegh

Darkly funny, Moshfegh’s novel looks at the plight of depressed young woman who takes a drug-assisted year off from her life.

Offill has crafted a small gem on the disquietude of life during climate change, and given us an unforgettable character with whom to share our apprehensions.

Satrapi’s graphic novel about growing up in Iran during the Islamic revolution is riveting and full of humanity.

A hallucinatory semi-autobiographical story of the life of a young woman in Nunavut. Mythical, violent, haunting, and unforgettable.

Bonus preview section this month, because there are so many great books by women coming out soon that I couldn't pick just one!

Broken (in the best possible way) by Jenny Lawson

Lawson is back with a collection of essays on the challenges of living while damaged. By turns spit-coffee-through-your-nose funny, righteously angry, and heartbreaking, the writing reveals a truly singular life. This is a person who loses shoes while wearing them, who dreams of adopting rats for the purpose of dressing them up in tiny outfits, who argues with her editor about whether the word “douchecanoe” should be hyphenated, and who struggles with crippling pain and anxiety. Her rant against insurance companies will have anyone who has dealt with a chronic illness standing and cheering. Lawson recognizes and celebrates the awkwardness and the cracked beauty that make us all human.

Of Women and Salt by Gabriela Garcia

This multi-generational diaspora story focuses on the lives of five generations of Cuban and Cuban-American women. From a cigar-roller in 19th century Havana to a drug addict in present-day Miami, each of the women’s lives bear the echoes of those of the mothers and grandmothers before them. Their immigration experiences are intertwined with those of a Salvadoran refugee and her daughter. Garcia pays homage to Les Miserables, a work referenced and analogized throughout the book. At just over 200 pages, the emotionally-charged narrative leaves us wanting to know more about these flawed, courageous women.

A Ghost in the Throat by Doireann Ni Ghriofa

“This is a female text.” This declaration is stated and restated throughout Doirann Ni Ghriofa’s fierce treatise. The focus is a poem by eighteenth-century Irish noblewoman Eibhlin Dubh Ni Chonaill, who, on discovering that her husband had been murdered, drank handfuls of his blood, then wrote an epic lament about him. Part memoir, part historical fiction, part literary criticism, the book relates Ni Ghriofa’s obsessive quest to find out about this remarkable woman. Between changing diapers, nursing, cooking, and laundry, she researches, translates, and writes. Little is known of Ni Chonaill’s life, so Ni Ghriofa is left to imagine, to dream, to speculate, and to invent her character. In the process, she finds a kindred spirit, one whose pain flows like her own mother’s milk. The poem, a banshee’s wail of  anger and deep sorrow, is printed in its entirety. This achingly personal book will stay with the reader long after the last page is turned.

Let Them Not Say

Let them not say:   they did not taste it.

We ate, we trembled.

Let them not say:   it was not spoken, not written.

We witnessed with voices and hands.

Let them not say:   they did nothing

Let them say, as they must say something:

Let them say we warmed ourselves by it,

read by its light, praised,

I can’t decide, was it a mistake? Or is it better this way?

Twice now, pretending to be a goddess,

I’ve created humans out of my desire.

Funnily, though, that’s where the fake goddess act ends.

After that, you revert to being a woman, as before.

Good and bad, dreams, sorrow—it’s all beyond your will again.

So, the puppet’s dance will resume once more, on a string.

I look into the mirror: Do I know this face?

Somewhere it lies hidden, that secret divine will.

Or was it just a momentary spark,

the celestial celebration of an instant,

an act of pity by a humorist in the background—

If you're in Akron, stop into Elizabeth's Bookstore, a new woman-owned, Black-owned indie. Click here to read all about it.

Click here to read about 19th-century women who bucked tradition to write novels.

We lost a great poet when Diane DiPrima died last year. Click here to read Hilton Obenzinger's 2013 interview with her.

Click here to read an essay by the iconic Joan Didion on why she writes.

Olivia Laing is one of my favorite essayists. Her new book, Everybody: A Book About Freedom comes out in May. Click here to read her thoughts on art and the human spirit.

Hyperbole and a Half: Unfortunate Situations, Flawed Coping Mechanisms, Mayhem, and Other Things That Happened (Paperback)

A Visit from the Goon Squad (Paperback)

Bring Up the Bodies: A Novel (Wolf Hall Trilogy #2) (Paperback)

The Mirror & the Light: A Novel (Wolf Hall Trilogy #3) (Paperback)

My Year of Rest and Relaxation: A Novel (Paperback)

Of Women and Salt: A Novel (Hardcover)

A Ghost in the Throat (Paperback)