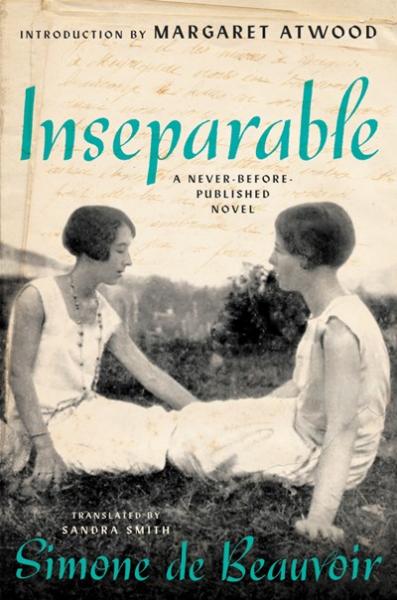 In celebration of Women's History Month, the I'm focusing on some of my favorite reads from the past year or so. We begin with a new/old book by a feminist icon. Read on -

In 1954, feminist philosopher and novelist Simone de Beauvoir wrote Inseparable, a slender coming-of age story. The book was written about the same time as her masterpiece, The Mandarins, but remained unpublished until September of last year. Translated by Sandra Smith, the book is a delicious little package which includes a wry introduction by Margaret Atwood, a refreshingly frank afterword by her adopted daughter Sylvie, and a selection of correspondence between De Beauvoir and her friend Zaza, on whom the book is based.

The novel is largely autobiographical, based on the quicksilver friendship between Andree (Zaza) and Sylvie (Simone.) The girls meet at school as nine-year-olds and Sylvie is immediately drawn to Andree’s sharp, somewhat brittle character. Smart, talented, confident, and insolent, Andree is the opposite of the obedient, studious Sylvie.

Sylvie enjoys the camaraderie of school, but has no real friends: “I wasn’t close with anyone in particular, but I liked the sound we made all together.” This is Sylvie’s first true friendship and she is consumed by it. Though the relationship develops quickly, Andree keeps Sylvie at arm’s length. As the two grow, Andree’s rebelliousness rubs off on Sylvie. One night, drunk on cherries in brandy, Sylvie confesses her love for Andree, who is reeling from a broken relationship with a boy. She also admits that she has lost her faith in God.”if God exists,” states Sylvie, “evil is incomprehensible.” Andree, concerned for Sylvie’s soul, holds onto her faith, but not without considerable existential struggle.

At university, Sylvie befriends Pascal. The two enjoy a platonic, richly intellectual friendship. When Andree meets Pascal, the two fall in love, As Pascal is not Andree’s social equal, they keep their relationship secret from her mother, who is on the lookout for a suitable husband for her. Sylvie is conflicted about their love, jealous but wanting nothing more than Andree’s happiness.

De Beauvoir performs the delicate tightrope walk that was tacitly required of women in the ‘50s when writing about the tempestuousness and ardency of female friendship and love. The complications of Sylvie and Andree’s relationship are blurred like a watercolor, compelling the reader to peer closely to discern the details.

De Beauvoir’s depiction of two young women grappling with the weighty issues of love, God, and mortality is graceful yet passionately charged. There is great tenderness in this sylphlike sketch.

Let Me Tell You What I Mean by Joan Didion

Published shortly before Didion’s death last year, this collection of essays from 1968-2000 provides her incisive take on such subjects as the public persona of Nancy Reagan, the prose of Ernest Hemingway, and the marketing of Martha Stewart. The selections show a the evolution of a writer with a point of view as sharp as her pen. (Mac’s Backs Book Club will discuss this book on March 16. For more information, click here - https://www.macsbacks.com/event/macs-backs-book-club-discusses-let-me-tell-you-what-i-mean)

This 50th anniversary collection is the latest iteration of a work that has been expanded and added to over the years. This one includes poems written between 2007 and until DiPrima’s death in 2020. The poems are an electrifying cry for justice and compassion, and even the earliest ones are as relevant as today’s headlines. (See excerpt below.)

As You Were by Elaine Feeney

Acerbic, funny, and sad, poet Elaine Feeney’s fiction debut is a bitingly compassionate commentary on community found in the the most trying of circumstances, in this case, an oncology ward. The story is told in small vignettes made up of memories, dreams, and observations. Each fragment is a prismatic view of the narrator’s fear, exhaustion, and wonder at life’s rich pageant.

Lauren Groff’s transcendent novel is a speculation on the life of Marie de France, the 12th-century poet and abbess.  Groff has established herself as a writer of deep intelligence with a canny flair for dissecting the human condition. She does not disappoint here. Matrix is historical fiction of the highest order.

In this novel, Haigh brings a laser focus to the dangers and ordeals that abortion providers and women seeking abortions face on a daily basis. Multiple story lines wind together, tightening like a clock spring. The book’s value is in its strength of conviction and its nuanced character development. If this novel does nothing else, it will take a step toward convincing doubters that access to safe abortion is health care.

Say This by Elise Levine

The first of these two linked novellas is told through the eyes of a woman looking back on the abusive relationship she had as a teen with her older cousin. The second is from the multiple points of view of the family of the man he killed. Told in jarring bursts of prose, this is a chilling, heart-stopping read.

A Childen’s Bible by Lydia Millet

Lord of the Flies meets the book of Revelation. A group of resourceful kids leave their inattentive parents when an apocalyptic storm hits their summer getaway. Darkly funny and heartbreaking.

A sweet and strange book about a misfit who finds purpose behind the counter of a convenience store, defying society’s expectations of her. Keiko is one of the most memorable and oddly relatable protagonists you will encounter.

On Animals by Susan Orlean

Orlean’s body of work is the epitome of readable literary non-fiction. Here she turns her sharp eye on animals in this entertaining and educational collection of essays. From the plight of animals in movies to the donkeys of Fes, Morocco to her own family chickens, the book is full of fascinating, sometimes hilarious stories and “hey, didya know” facts. A fun, well-researched read.

This month's poetry selections are from legendary Beat poet Diane di Prima, the late, much-loved Bill Arthrell, and Ukrainian poet Ilya Kaminsky. Our hearts go out to the people of Ukraine.

Think of it as an experiment. Tip of the tip of the

iceberg, and we ain’t even on the Titanic. Not that

much “safety”. But it’s a start. Sit down on a curb with

somebody. Break what you got to eat in two pieces. If

they don’t seem even, take the smaller piece. (It’s an

experiment, you’re only doing it once.) Both of you

eat what you got. Chewing slowly, noticing the taste.

Sit five to fifteen minutes together without saying

anything. Just notice how the world looks. Maybe you

feel the same as ever. Maybe not.

"We are deeply saddened to learn that retired teacher, traveler and poet Bill Arthrell has died in a car crash on his way home from visiting relatives in Tulsa.

Bill spoke several times at Mac's over the years, most recently about the Maidan Revolution in Ukraine which he witnessed. He published a collection of poems about the experience (Ukrainian Heart) and was part of a Ukrainian documentary. Bill was a passionate teacher at heart and his presentations were a creative blend of lecture, poetry and slide show. He was at Kent State during the Vietnam protests and shootings and decades later went overseas to meet and apologize to the Vietnamese people about the war.

We will miss his poems, his zeal for social justice and his compassion. We are privileged to have known him."

Below is a sampling of poems from his 2019 publication, Ukrainian Heart -

stars blazing in my heart—

I implore the sun

to drift into darkness—

with my dark stare—

I stand on Black Earth.

it proceeds     far beyond

Is there an end

We Lived Happily During the War

And when they bombed other people’s houses, we

but not enough, we opposed them but not

in my bed, around my bed America

I took a chair outside and watched the sun.

In the sixth month

of a disastrous reign in the house of money

our great country of money, we (forgive us)

lived happily during the war.

So many good books are coming out in the next few months! Here are a few to keep on your radar -

The Candy House by Jennifer Egan

In this captivating new work, Egan revisits the brilliantly splintered narrative style that won her the Pulitzer 20 years ago for A Visit from the Goon Squad. The central focus is the development of technology that allows the user not only to access their entire life’s memory, but to share it with others. The story leapfrogs through time, with with multiple characters’ arcs intersecting and then pulling apart like a tangled ball of yarn. There are a few sly references to Goon Squad that will amuse the alert reader familiar with that work. The Candy House is a tour de force of style, form, and character development.

The Unwritten Book by Samantha Hunt

Novelist Hunt turns her pen to nonfiction in this intriguing, unclassifiable new work. She ruminates on books, ghosts, grief, family betrayal, and what it would feel like if people could fly. Interspersed are chapters of a book that her alcoholic father started but left unfinished when he died, complete with her commentary in the form of side notes. Hunt’s writing is thoughtful and often rhapsodic, laced through with poetic turns of phrase. A haunting, engrossing  read.

Douglas Stuart’s Booker-winning debut novel, Shuggie Bain, was a punch to the heart. In Young Mungo, he aims lower. While the book touches on several of the themes of Shuggie Bain - gay teen growing up in hardscrabble Glasgow with an alcoholic mother and two semi-supportive siblings - this is a harsher story, fraught with violence and bigotry. It follows the misfortunes of 15-year-old Mungo Hamilton, a shy boy who is coming to terms with his sexuality. His budding romance with James, a neighbor boy who keeps pigeons, thrills and terrifies him. It doesn’t help that James is Catholic and Mungo is Protestant in a city where the two sides are warring factions. Mungo’s mother sends him off on a fishing trip with two strange, drunken men with the cockeyed belief that it will bring him in touch with his masculinity. The narrative seesaws between this nightmarish excursion and Mungo’s increasingly unmanagable home life. It’s a brutal, richly related story that pulls no punches. In Mungo’s complicated world, revenge and redemption walk hand in hand.

Click here to read about how Joan Didion encouraged us to embrace complexity.

Ukrainian poet Iya Kiva's work will wring your heart dry. Click here to read about her and her poetry.

I had the extreme pleasure of meeting the charming Douglas Stuart via Zoom a few months ago. To learn more about the author of Shuggie Bain and Young Mungo, click here.

Let Me Tell You What I Mean (Vintage International) (Paperback)

The Candy House: A Novel (Hardcover)

The Unwritten Book: An Investigation (Hardcover)