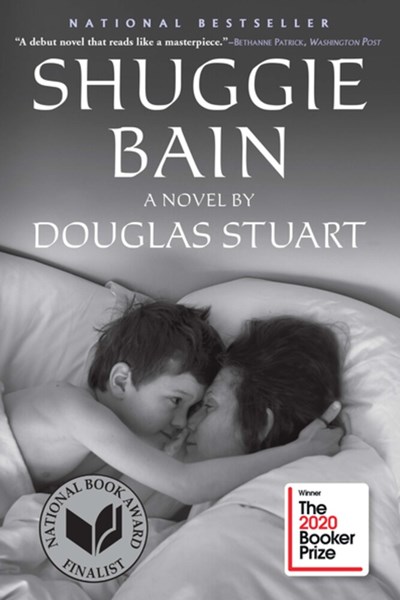 This searing, heartbreaking debut novel is a story of addiction and love, loyalty and betrayal.

The title character is a boy in 1980’s Glasgow, growing up with an alcoholic mother and an abusive father. The narrative follows Shuggie from his early childhood to his adolescence, bookending the story with the view from his sixteen-year-old self.

Shuggie’s parents, Agnes and Shug, split up early in the novel, and the family falls apart from there. His sister Catherine gets married and moves to South Africa, his brother Leek lingers long enough to mentor Shuggie, tutoring him on how to act more masculine in a feeble effort to keep the bullies at bay. But even Leek, who dreams of attending art school, eventually has had enough of his mother’s drinking, and jumps ship. The task of keeping Agnes safe and alive falls to Shuggie.

The character of Agnes could, in the hands of a lesser writer, been nothing more than a pathetic drunkard, but Stuart gives her a depth and complexity and wobbly dignity that somehow makes you root for her. Even at her worst, she makes a point of being immaculately groomed whenever she leaves the house, holding her head high after a night of drunken debauchery that in no way escapes the neighbors’ judgmental eyes. Her increasing dependence on alcohol makes her vulnerable to predatory men and enabling “friends.”

Shuggie has a lot on his plate besides his parents’ betrayal of trust. He is constantly bullied for being gay, he has no real friends, he misses school to take care of Agnes, he develops stomach problems due to stress and the poor diet of the poverty-stricken. Yet his loyalty to his mother is unflinching. He defends her from the neighbors, he cleans up her vomit, he makes sure her hair is perfect and her stockings are without snags before she goes out. And he loves her unconditionally, even if this love is often enabling.

Though the book is long, over 400 pages, the writing has a propulsive rhythm that keeps the story moving irresistibly forward. The Scots dialect and slang may make some readers scratch their heads, but it is crucial to the atmosphere and the character-building of the novel. Stuart’s descriptions of lower-class Glasgow neighborhoods are so rich you can almost smell the rot and putrefaction.

The first and last sections of the book view Shuggie as a sixteen-year-old, living on his own in a boarding house and working at a deli counter. It’s a beautiful device that has us looking back and forward at the same time. Our hearts break at what he endured as a child; at the same time we are pulling for him in what lies ahead.

Motherhood has always been a rich source of fodder for fiction and memoir writers. Here are some of my favorite books that deal with the mother/child bond in all its diverse permutations -

A darkly funny look at how a hardscrabble family deals with a mother who is quirky at best, unhinged at worst.

The Handmaid’s Tale by Margaret Atwood

Atwood’s dystopian classic about a society that forces procreation has spawned a host of imitators, but has yet to be dethroned.

Are You My Mother?  by Alison Bechdel

Bechdel’s graphic memoir about living up to her distant mother’s expectations is poignant, complex, and honest.

The Mothers by Brit Bennett

A pregnant teen in southern California grapples with decisions informed by her mother’s suicide, her religious upbringing, and the judgements of her extended family and friends.

Future Home of the Living God by Louise Erdrich

In this dystopian novel, a pregnant Ojibwe woman tries to return to her birth family in a time of war, environmental breakdown, and religious tyranny.

O’Farrell focuses on the wife of a famed playwright who loses her child to the plague in 16th century England. A devastating story of loss and the strength of the woman who endures it.

The Darkest Child by Delores Phillips

Tangy Mae grows up in Jim Crow Georgia under the thumb of her violently alcoholic mother. The smartest yet darkest of her ten siblings in an age when color is everything, her strength and intelligence are constantly tested.

Of Woman Born: Motherhood as Experience and Institution by Adrienne Rich

First published in 1976, this is Rich’s groundbreaking radical feminist examination of the institution of motherhood.

My Name is Lucy Barton by Elizabeth Strout

This gentle, compassionate story examines the broken bond between Lucy and her estranged mother, as well as her love for her own daughters.

This hallucinatory semi-autobiographical novel follows a pregnant teen growing up in Nunavut in the 1970’s. It is poetic and uncompromising in its descriptions of the harsh beauty of the north and the hardships the girl faces.

When Women Were Birds by Terry Tempest Williams

This lovely little book is Williams’ eloquent paean to her mother, to the natural world, and to women’s voices through the ages. She says it much better than I can - “Once upon a time, when women were birds, there was the simple understanding that to sing at dawn and to sing at dusk was to heal the world through joy. The birds still remember what we have forgotten, that the world is meant to be celebrated.”

There have been countless poems written about and by mothers. Here are some of my favorites -

Life is short, though I keep this from my children.

Life is short, and I’ve shortened mine

in a thousand delicious, ill-advised ways,

I’ll keep from my children. The world is at least

estimate, though I keep this from my children.

For every bird there is a stone thrown at a bird.

For every loved child, a child broken, bagged,

sunk in a lake. Life is short and the world

is at least half terrible, and for every kind

stranger, there is one who would break you,

though I keep this from my children. I am trying

to sell them the world. Any decent realtor,

walking you through a real shithole, chirps on

about good bones: This place could be beautiful,

right? You could make this place beautiful.

The other day I was ricocheting slowly

off the blue walls of this room,

moving as if underwater from typewriter to piano,

from bookshelf to an envelope lying on the floor,

when I found myself in the L section of the dictionary

where my eyes fell upon the word lanyard.

could send one into the past more suddenly—

a past where I sat at a workbench at a camp

by a deep Adirondack lake

into a lanyard, a gift for my mother.

I had never seen anyone use a lanyard

or wear one, if that’s what you did with them,

but that did not keep me from crossing

strand over strand again and again

until I had made a boxy

red and white lanyard for my mother.

She gave me life and milk from her breasts,

and I gave her a lanyard.

She nursed me in many a sick room,

lifted spoons of medicine to my lips,

laid cold face-cloths on my forehead,

and then led me out into the airy light

and taught me to walk and swim,

and I, in turn, presented her with a lanyard.

Here are thousands of meals, she said,

and here is clothing and a good education.

And here is your lanyard, I replied,

which I made with a little help from a counselor.

Here is a breathing body and a beating heart,

and two clear eyes to read the world, she whispered,

and here, I said, is the lanyard I made at camp.

And here, I wish to say to her now,

is a smaller gift—not the worn truth

that you can never repay your mother,

but the rueful admission that when she took

the two-tone lanyard from my hand,

I was as sure as a boy could be

that this useless, worthless thing I wove

out of boredom would be enough to make us even.

not quite what one would choose.

Love set you going like a fat gold watch.

The midwife slapped your footsoles, and your bald cry

Took its place among the elements.

In a drafty museum, your nakedness

Shadows our safety. We stand round blankly as walls.

I’m no more your mother

Effacement at the wind’s hand.

Flickers among the flat pink roses. I wake to listen:

A far sea moves in my ear.

One cry, and I stumble from bed, cow-heavy and floral

In my Victorian nightgown.

Your mouth opens clean as a cat’s. The window square

Whitens and swallows its dull stars. And now you try

Your handful of notes;

Some great books are coming out in the next few months! Here are some previews -

Everybody: A Book About Freedom by Olivia Laing

Laing continues to cement her reputation as one of today’s most astute social commentators and essayists in this new collection. In this book, she focuses on the body as a vessel for social change. The connecting thread running through the book is the life of psychoanalyst Wilhelm Reich. Using his controversial work as a springboard, she explores issues of sex, race, protest, and feminism. With commentary on the work of such disparate individuals as Christopher Isherwood, Kathy Acker, Nina Simone, Susan Sontag, and Malcolm X, the book is timely and thought-provoking, intellectually rigorous yet thoroughly readable.

So much heart jammed into such a small package! This is a devastating story of two misfit teens who find sanctuary from school bullies in each other. Kawakami is unflinching in her descriptions of the violence perpetrated on the protagonists. The universal awkwardness of the 14-year-old is laid bare on the page. The teens’ loyalty to one another in the face of extreme adversity almost destroys them, (and will destroy the reader!). An elegant paean to the challenges and heartbreaks of growing up weird and the inestimable value of true friendship.

The Manningtree Witches by A.K. Blakemore

Based on true accounts of witch hunts in England in the 1640’s, this rich novel brings a terrifying  page of history into sharp focus. Narrator Rebecca West, accused of witchcraft along with her mother and several other women in the town of Manningtree, has an arch, often sardonic voice. The language is authentic, poetic, and fierce. Her account of the horrors wrought by religious zealotry pulls the reader irresistibly into a dark past, with its sights, smells, and hardships, both physical and mental. The Devil’s bargains that Rebecca strikes in order to survive and to achieve some small measure of vindication will be the topic of many book club discussions. Fans of Hamnet and The Mercies, here is your next read.

Michelle Zauner's memoir, Crying in H Mart, has been flying off the shelves. Click here to read about it.

The Handmaid's Tale: A Novel (Paperback)

Are You My Mother?: A Comic Drama (Paperback)

The Mothers: A Novel (Paperback)

Of Woman Born: Motherhood as Experience and Institution (Paperback)

My Name Is Lucy Barton: A Novel (Paperback)

When Women Were Birds: Fifty-four Variations on Voice (Paperback)