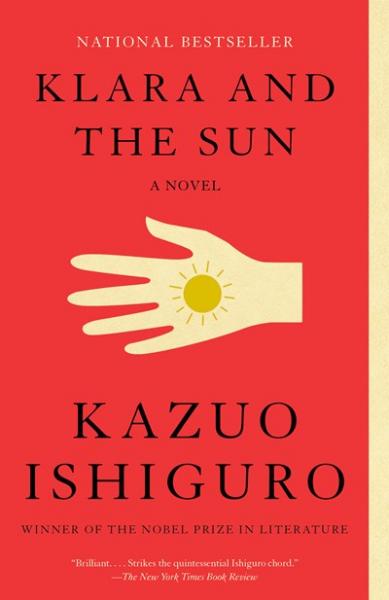 I don't usually focus on a single author in these monthly posts, but our book club recently discussed Kazuo Ishiguro's Klara and the Sun and it got me thinking about other books by this amazing author that I have loved over the years. Read on -

Klara and the Sun, Kazuo Ishiguro’s breath-taking 2021 novel, is a testament to humanity itself, posing lofty questions about love, longing, compassion, and sorrow. With elegant language and fully-fleshed characters, he urges us to examine what it means to be alive.

Klara, the narrator is an AF, an Artificial Friend. She has been chosen by Josie, a sickly teen who connects with Klara through the window of the department store where she is being sold. Klara has been programmed to be keenly observant, picking up subtle details of not only her physical surroundings, but of the body language of the humans around her. These attributes resonate so strongly with Josie that she chooses her over the newer, more refined models.

Josie’s parents are divorced, and her older sister has died of a mysterious disease, which may or may not be what Josie suffers from. Josie and her mother live in the outskirts of an unnamed city in an unspecified time in the vague future. Josie’s mother Chrissie is desperate in her grief and worry and her estranged father is distant and angry. Josie and Klara become fast friends, and Klara is quickly assimilated into the small family, which includes a wary housekeeper named Melania.

Josie and the neighbor boy, Rick, have been friends since childhood, a friendship that has deepened into love. Their plan to attend the same college are threatened by Rick’s family financial status and his manipulative, needy mother Helen. Rick and Klara become allies in their fight to keep Josie alive.

Klara’s capacity for empathy makes her the unwitting confidante of the adults around her, from Chrissie to Melania to Helen. Klara absorbs their anxieties and takes it upon herself to try to save Josie’s life. She believes that striking a deal with the sun and, with the help of Josie’s father, destroying a polluting machine, will accomplish this goal. She puts her own existence at peril to help her friend.

Ishiguro has achieved a small miracle in the creation of Klara’s voice. While there are hints of the detachment and bemusement of the robot that she is, her thought processes are nuanced and deeply empathetic. The book explores the most crucial questions - What is friendship? What does it mean to be human? What are we willing to sacrifice for those we love?

It has been said of Ishiguro that he never writes the same book twice. Following is a selection of some of my favorite Ishiguro titles, which are as varied in subject matter as they are compelling reads.

Ishiguro takes on Arthurian legend in this labyrinthine novel about an elderly couple in search of their lost son. A collective amnesia has settled over Britain, thwarting their efforts. The book is a misty hymn to memory and longing.

Heart-stopping and full of suspense, this is the story of children raised in an isolated boarding school. As they reach adulthood, they learn the shocking truth about what makes them special.

These graceful stories of the redemptive power of music reinforce the notion that art is not a luxury. Rather it is a crucial necessity to keep us from despair. Each of the main characters in these stories navigates the complications of relationships, both personal and artistic.

The Remains of the Day

This heartbreaking story of an emotionally buttoned-down butler in post-World War II England is a commentary on the masks that people wear to present their best selves to the world. As Stevens approaches his final days in Lord Darlington’s employ, he begins to doubt whether his life has been well-spent working for a man with dark secrets in his past.

Happy Mother's day to those who celebrate! Below are a couple of poems that examine the often snarled ties that bind mother and child -

A Room of My Own

My mother had no room of her own

except the one inside her. In it she stored

what she chose not to talk about. No revelations

escaped from it, no family stories fell

from shelves to be burnished or embellished.

She kept herself to herself, a private life

in a private room, door firmly shut when I knocked.

When I was twelve or fourteen, uncertain

where I belonged, I asked if we could see

the family tree her brother was rumored to have.

Were we in the kitchen— Was she baking?—

putting pincurls in my hair? I don’t want to know

about the sheep thieves she said. I remember

she brooked no argument when angered.

Her sayings were rebukes—if you can’t say

something nice, don’t say anything at all…curiosity

killed the cat…you made your bed, now lie in it…

Lessons that can still close my throat.

I learned refusal, distanced myself

from family conversation, plunged into books,

chose silence over speech. Here I am

some sixty years later, feeling I betray her

Yet I also have that room in me.

It serves to keep me safe.

It serves to keep people out.

This is the best day ever

The darkness out there, wet as a newborn

I dog-eared the book & immediately

How else do we return to ourselves but to fold

The page so it points to the good part

Another country burning on TV

What we’ll always have is something we lost

In the snow, the dry outline of my mother

Promise me you won’t vanish again, I said

She lay there awhile, thinking it over

One by one the houses turned off their lights

I lay down on her outline, to keep her true

Together we made an angel

It looked like something being destroyed in a blizzard

I haven’t killed a thing since

Girls They Write Songs About by Carlene Bauer

Bauer’s new novel is a rock anthem to female friendship. Pulsing with the soundtrack of the ’90’s through the present, it traces the bond between Rose and Charlotte, friends who cut their teeth as pop culture journalists in New York. Life happens, as it will, with relationships forming and breaking, marriage and divorce, children and abortions, and careers pulling them in different directions. While the ties that bind them stretch almost to the breaking point, they never quite snap. Told through Charlotte’s eyes with the world-weary smirk of a true Gen-Xer, the sheen of sardonic humor has an undercoat of sadness and resignation. The book is wholly evocative of its time and place and shot through with feminist grit.

Murata’s short story collection is not for the squeamish. In her off-kilter world, people use human body parts as fashion accessories, participate in ritual cannibalism as a means of honoring the dead, and own humans as pets. A woman has a close relationship with her sentient curtains, and another splinters her personality to fit her disparate social groups. Murata tells these tales with such a detached, matter-of-fact tone, that it all feels plausible once you get past the queasy feeling in the pit of your stomach. Ginny Tapley Takemori’s translation strikes the perfect pitch for these odd, curiously compelling stories.

For further reading and listening -

Not every mother is a nurturing goddess. Click here for a short list of books with flawed mother figures.

It takes a special person to raise kids alone. Click here for a list of books featuring single mothers.

Click here to listen to Terry Gross' interview with Kazou Ishiguro about the writing of Klara and the Sun.

Klara and the Sun: A novel (Vintage International) (Paperback)

The Remains of the Day (Vintage International) (Paperback)

Time Is a Mother (Hardcover)

Girls They Write Songs About: A Novel (Hardcover)