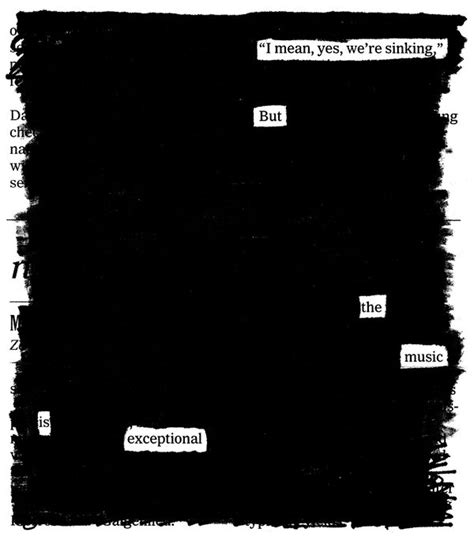 Art by Austin Kleon "Overheard on the Titanic"

In my other life, when I’m not selling books, blogging, or leading our book club, I am a musician. Fortunately for me in the time of Covid, it’s not my main source of income. Many of my friends and acquaintances are not so lucky these days. Professional musicians who depend on gigs to survive are having a hard time getting by, as are the venues which host them. So here’s my PSA for the month - if your favorite band or musician is streaming a show online, make sure you drop some love into their Bandcamp, Patreon, or PayPal account. If you love a particular venue and want it to be there post-Covid, buy a gift certificate or a T-shirt from them or donate to the NIVA Emergency Relief Fund. Thank you.

That said, this month, I’m turning my focus to books about music and musicians. Let’s start with a review of Sarah Smarsh’s affectionate new take on a country music legend -

She Come By It Natural: Dolly Parton and the Women Who Lived Her Songs by Sarah Smarsh

Journalist and social commentator Smarsh (Heartland: A Memoir of Working Hard and Being Broke in the Richest Country on Earth) turns her focus on a single hard-working woman in her latest book. Smarsh grew up in rural Kansas to the soundtrack of country music sung by the likes of Reba MacIntyre, Shania Twain, and K. T. Oslin. Her grandmother introduced her to the godmothers of the genre - Loretta Lynn, Patsy Cline, and, of course, Dolly Parton. Smarsh draws parallels between the abject poverty of Parton’s upbringing in Sevier County, Tennessee, and her own struggles growing up poor in Kansas.

Parton has always been a pop culture icon, but in recent years has emerged as a feminist symbol. Her visage, under the signature mountain of yellow hair, adorns coffee mugs, candles, t-shirts, and greeting cards. While Parton does not call herself a feminist, her life tells a different story. Smarsh recounts how the singer has fiercely fought for self-actualization in her career, making shrewd business moves while charmingly making mincemeat out of anyone who would minimize her. When Elvis himself wanted to record “I Will Always Love You,” but insisted on taking half the publishing of one of Parton’s most iconic songs for himself, she politely told him no. The song went on to become a number one hit not once, but three times, twice with Parton’s own recordings and once with Whitney Houston’s. Smarsh writes: “The confidence to heed her inner voice and, in doing so, piss off a powerful man allowed Parton to … say no to Elvis, and become not just a successful artist but also a business juggernaut.”

Much has been made of Parton’s outsized appearance. Smarsh recounts the myriad leering actions by men who simply don’t know how to react to a women who owns her sexuality. She writes of an appearance on the Porter Wagoner show by singer Jimmy Dean, who all but gropes her on camera while she struggles to push him away. “Parton has held her own against Wagoner in a verbal fencing match,” writes Smarsh, “only to be physically accosted by a man whose name was synonymous with sausage.”

Parton’s work as a philanthropist is well documented. Her Imagination Library project has put books into the hands of millions of children worldwide and her theme park near her home town has created thousands of jobs. But there have been problematic aspects in some of her projects, most notably the annual Dixie Stampede, with its Confederate imagery. While this has been toned down in recent years, the event remains a celebration of the antebellum South. Smarsh doesn’t shy away from taking Parton to task for this as well as celebrating her good works.

Throughout the book, Smarsh’s ardent admiration of Parton shines through. She holds her idol up as an almost unwitting symbol of feminism and as a champion for the downtrodden. Her writing is clear, fierce, and pulls no punches, whether holding Parton accountable for errors in judgment or holding her up as a beacon of light for the underclass.

And if you are a Parton fan, keep an eye open for this autobiography, coming out on November 17th -

Here’s a preview from the publisher -

Dolly Parton, Songteller: My Life in Lyrics is a landmark celebration of the remarkable life and career of a country music and pop culture legend.

As told by Dolly Parton in her own inimitable words, explore the songs that have defined her journey. Illustrated throughout with previously unpublished images from Dolly Parton's personal and business archives.

Mining over 60 years of songwriting, Dolly Parton highlights 175 of her songs and brings readers behind the lyrics.

There is no more insightful commentator on music and society than Abdurraqib. This collection of essays uses pop culture as a means of making sense of the world.

Not so much a book about music as a memoir of the composer’s years in Alaska, the friendships he formed there, and the heartbreak of leaving the increasingly compromised landscape.

Hunger Makes Me a Modern Girl by Carrie Brownstein

This raw, honest memoir traces Brownstein’s life from her childhood in the Pacific Northwest to her growth as a musician in Sleater-Kinney, to her experience as co-creator of Portlandia.

This classic of twentieth-century avant-garde music literature gives a glimpse into a truly singular mind.

A history of the piano told through a sociological lens by the former program annotator for the Cleveland Orchestra. Entertaining, educational, and highly readable.

An overview in essays of the life and work of pianist/composer Julius Eastman, one of twentieth century music’s greatest but most troubled geniuses.

The Rest is Noise by Alex Ross

Ross, music critic for The New Yorker, is one of the best writers on music out there. This collection of essays puts twentieth-century music squarely in context with the era’s history.

This poetic memoir traces the rare friendship between Smith and photographer Robert Mapplethorpe.

That crazed girl improvising her music.

Her poetry, dancing upon the shore,

Her soul in division from itself

Climbing, falling She knew not where,

Hiding amid the cargo of a steamship,

Her knee-cap broken, that girl I declare

A beautiful lofty thing, or a thing

No matter what disaster occurred

She stood in desperate music wound,

Wound, wound, and she made in her triumph

Where the bales and the baskets lay

If Light Were Music by Daniel Thompson

If light were music

Toward its golden star

And in that turning

The echo of the moon

On the water reveals

The killer in the mirror

Pitches on the shore

Whose heart of glass reads

If light were language

Spoken only in tongues

By hearts on fire

The wordless eye would sing

If light were sound

Natural to the ground of all beings

Would each creature cross the field

To comfort each in the deep dreaming?

How did you manage

To drag a granite

Up to the mountain top

Play in a flutter of fingers

And with a feather from an eagle wing

Change it into a bow and cello

Until it became a soaring bird?

How to you gather

The altitudes mist into your lap

In a singing cloud?

*My gratitude goes out to Suzanne DeGaetano for bringing this poem to my attention. She generously dedicated her reading of it to me in an event at Mahall’s several years ago. Thank you, Suzanne!

We lost an iconic poet last month. Diane DiPrima was a towering figure among Beat writers. Here is one of her early works -

not quite what one would choose

I love reading about music almost as much as I love playing it. Here are some great articles for futher exploration -

Click here to listen to an exquisite choral realization of one of Sappho's poems.

Neal Karlen had a complicated relationship with Prince. Click here to read more.

Click here to read Anais Duplan's history of the classification of Black music.

The Center of Everything by Jamie Harrison

The slipperiness of memory, the strength and weakness of family ties, and the unexpected jolt of sudden death are all touchstones of this striking novel. It’s 2002, and Polly, who has sustained a head injury that causes her to doubt her own recollections, is preparing for a Fourth of July family reunion. The death of a family friend throws the gathering into turmoil, bringing up skeletons from the extended family’s past. Polly experiences dreams that may or may not be memories. The narrative alternates between events from 1968, the repercussions of which extend to the novel’s present. The writing is crisp, the large cast of characters is adeptly drawn, and plot twists and turns like sheets on a laundry line.

She Come By It Natural: Dolly Parton and the Women Who Lived Her Songs (Hardcover)

They Can't Kill Us Until They Kill Us (Paperback)

Hunger Makes Me a Modern Girl: A Memoir (Paperback)

The Rest Is Noise: Listening to the Twentieth Century (Paperback)

The Center of Everything (Hardcover)