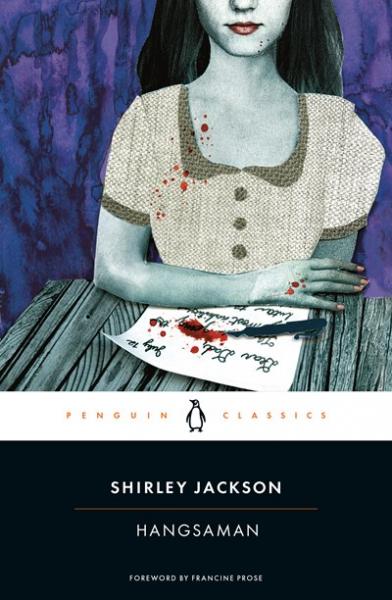 It’s fall, and for many, the darkening of the days brings out the desire to read dark literature. When it comes to deep explorations into the murky corners of the human psyche, you can’t go wrong with Shirley Jackson as your tour guide.

While Jackson is best known for her chilling short story “The Lottery” and her classic horror novels The Haunting of Hill House and We Have Always Lived in the Castle, her early novel Hangsaman shows a writer honing her craft on examining the roots of madness. It is not a horror story in the spirit of her later work, but is no less chilling in its depiction of a young woman succumbing to pressures from outside and in.

The novel is based on a true story of the unsolved disappearance of a Bennington college student in the 1940’s. Natalie Waite, the book’s heroine, looks forward to college, if only to escape her domineering father and cowed, high-strung mother. Natalie’s father is a frustrated writer, and he takes that frustration out on Natalie and her mother with snide reproach. Jackson’s depiction of the stultifying nature of suburban life in post-World War II America has the keen edge of a carving knife.

Before Natalie leaves for college, her parents throw a party which quickly devolves into a drunken bacchanal. Natalie moves through the night trying on different adult personas in preparation for leaving the nest. At one point, she is led away from the house by a strange man who sexually assaults her. She suppresses the memory and heads off to college with the hopeful anticipation of reinvention.

At school, she navigates the labyrinthine world of cliques, becomes frustrated and bored with her studies, and falls in love with a snobbish, disdainful professor. She retreats into a fantasy world which she documents in a journal entries written in the third person. Reality and fantasy become increasingly blurred as Natalie’s disappointment in college life grows.

She strikes up a friendship with the rebellious, spirited Tony, who leads her on potentially dangerous, self-destructive adventures. Their relationship hints at the possibility of a lesbian affair, a scandalous prospect in the late ’40’s. Natalie’s attraction to Tony is akin to stepping perilously close to a cliff’s edge.

Suicide is never far from Natalie’s elbow. Her bitterly critical father mockingly suggests that it is her lot. The object of her crush, Professor Langdon, offers her a world-weary disavowal of the notion that one must die by one’s own hand to be taken seriously as a writer. Still, she toys with the idea of self-destruction throughout the book as her psyche continues its downward spiral.

The novel is a tightly-wound spool of menace, a deep dive into a mind warped by the despair and ennui that permeated life at the dawn of the Cold War in America. Sharply written and acutely observed, it is the work of a writer with a deep understanding of the hairsbreadth line that separates sanity from insanity.

Danielewski’s chilling twist on the classic haunted house story has become a classic in experimental literature, playing with format, structure, and illustration.

This short narrative of the psychological horrors that result from a woman being infantilized by her controlling husband will haunt you long after you finish it. A brief but towering work of early feminist literature.

This time the haunted house is an Ikea-like furniture store in Cleveland. An intrepid trio of employees team up to solve the mystery of unexplained damage to store merchandise and encounter something much more sinister.

My Heart is a Chainsaw by Stephen Graham Jones

“Plucky” does not begin to describe Jade, a badass teenager whose outcast status threatens to get in the way of her solving the mystery of a murder in a town undergoing gentrification. A horrifying, shrewd commentary on Indigenous displacement and colonialism.

Our heroine Noemi goes to a remote mansion in the Mexican countryside to rescue her cousin and encounters a family whose legacy is based in unspeakable abominations. You’ll never look at mushrooms the same way.

Secret societies, magic, and shape-shifting combine with the real-life terror of the Jim Crow South in this fast-paced thriller.

As resonant today as it was 200 years ago, Shelley’s classic about the hubris of tampering with mortality is a horrifying yet compassionate take on what it means to be called “monster.”

Here are a few spooky-ish poems for October, along with some timely words from Emily Dickinson -

And near beside it is a star,

That watches likes an eye.

And thro’ the nursery window-pane

The witches have a fire again,

And now I know they’re having tea,

I wish they’d give a cup to me,

The King of Owls

It is said that playing cards were invented in 1392 to cure the French king, Charles VI, of madness. The suits in some of the first card packs consisted of Doves, Peacocks, Ravens, and Owls.

They say I am excitable! How could

I not scream? The Swiss monk’s tonsure

spun till it blurred yet his eyes were still.

I snapped my gaiter, hard, to stuff back

my mirth. Lords, he then began to speak.

Indus catarum, he said, presenting the game of cards

in which the state of the world is excellent described

and figured. He decked his mouth

as they do, a solemn stitch, and left cards

in my hands. I cast them down.

What need have I for amusement?

My brain’s a park. Yet your company

plucked them from the ground and began to play.

the deceiving constructions of your minds.

I have made the Deuce of Ravens my sword

falling through your pillows and rising,

with the jugular blood. Your bodies lurch

through the steps of an unpleasant dance.

No lutes play. I have silenced the lutes!

I keep watch in the clipped, convulsed garden.

I must have silence, to hear the messenger’s footfall

in my brain. For I am the King of Owls.

Where I float no shadow falls.

I have hungers, such terrible hungers, you cannot know.

Lords, I sharpen my talons on your bones.

“Faith” is a fine invention

"Faith" is a fine invention

When Gentlemen can see—

But Microscopes are prudent

Some great reads are coming out this month. Here are two -

My Monticello by Jocelyn Nicole Johnson

A fierce sense of defiance and a yearning for social justice permeates these searing short works. In “Control Negro,” a university professor prepares his black son for survival in the white world while clinically studying his experience. “Buying a House Ahead of the Apocalypse” is a checklist for home ownership that starts simple and quickly escalates to epochal proportions. The title novella takes place in the near future during a literal race war.  Da’Naisha, young, pregnant, and a direct descendent of Sally Hemings and Thomas Jefferson, leads a resistance group against violent white supremacists. The motley community takes shelter in none other than Monticello, Jefferson’s historic plantation, now a tourist attraction. Privation and infighting complicate their ability to fight. It is teeth-clenching terror shot through with faint rays of hope. My Monticello is a  fast-paced, wholly relevant collection.

When Two Feathers Fell From the Sky by Margaret Verble

It’s Nashville in the 1920’s and Two Feathers, a young Cherokee woman, isperforming as a horse-diver in a local zoo. A horrific accident puts her in a cast and brings to light a host of intrigues and suspicious occurrences. Added to Two’s already complicated existence are a creepy stalker, a lot of not-so-veiled racism, and a benevolent ghost. Her grit gets her through it all, along with friendships that transcend race, class, species, and even plane of existence. With its eclectic characters and colorful backdrop, the book will appeal to fans of Jennifer Egan, Karen Russell, and Tea Obreht.

The thirst for knowledge is at the root of Frankenstein. Click here to read more.

The Yellow Wallpaper and Other Stories (Dover Thrift Editions) (Paperback)

My Heart Is a Chainsaw (Hardcover)

When Two Feathers Fell from the Sky (Hardcover)