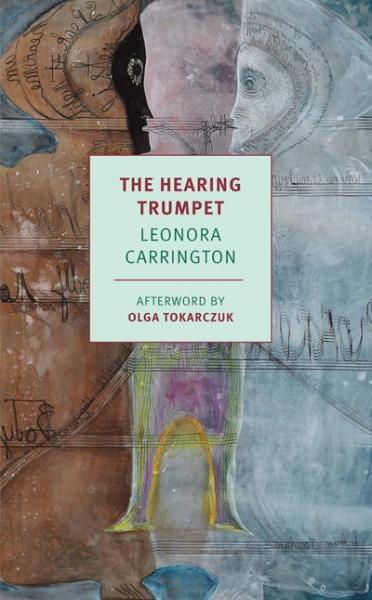 Reading Leonora Carrington’s books is akin to walking through a gallery of her paintings - strange, unsettling, surreal, and baffling, yet with a wild, color-saturated beauty.

The artist and writer led a long, storied life that began in England in 1917. She was the daughter of a wealthy textile manufacturer and led a rebellious youth, eventually moving to Paris as a young woman. There she was caught up in the swirl of the Parisian surrealist art scene in the ‘30s. She carried on a longtime affair with painter Max Ernst, fled the Nazis, and spent time in a mental institution against her will. She finally found contentment in Mexico, where she was a key player in the women’s liberation movement in the ‘70s. She died in Mexico City in 2011.

If we were to try to psychoanalyze Carrington, we would need look no further that the themes that run through her art and literature - talking animals, especially horses (tCarrington grew up an avid rider); food, with a focus on the rotting and disgusting; hair, as an adornment or a snare; religion, mythology, and folk tales and the fine lines that separate the three.

The Complete Stories of Leonora Carrington is a mind-blowing collection of 25 short, perplexing tales, full of vivid, unforgettable imagery. They were published between the ’30’s and the ’70’s and are a trove of the bizarre and the outre. “A Man in Love” is evocative of the Sleeping Beauty trope in which a fruit seller tends to his wife who has been sleeping for years. “White Rabbits” is a discomfiting tale of a woman whose creepy neighbors feed rotten meat to their rabbits. In “The House of Fear,” fear takes the persona of a woman (oh, and there are talking horses.) The Quetzacoatl myth gets the Carrington treatment in “A Mexican Fairy Tale,” complete with talking birds and moles.

Carrington’s writing, despite the flabbergasting subject matter, has the directness of a Grimm’s fairy tale. Of course Soviet rats perform surgery and a woman gives birth to a foal. Don't these things happen every day? Like the fantastical characters who stare out impassively from many of her paintings, there is a weird sense of inevitability to these stories. Hers is a singular voice that begs the reader to steep themselves in the bizarre images, and to apply their own interpretation to the rich symbolism that imbues these fearless, extravagant parables. They are puzzles ripe for the solving.

Her novel, The Hearing Trumpet, published in 1974, is more linear yet no less hallucinatory. Miriam Leatherby is a nonagenarian who has been committed to a home by her relatives. She is hard of hearing but sharp of mind and spirit. A friend gives her a hearing trumpet that allows her to selectively listen in on conversations. The home is run by a self-improvement cult that displays whiffs of religious fanaticism. The Gambits, the couple who run the home, put the residents through exercises and experiments, keeping them under constant observation and scrutiny. A mysterious painting of a winking Abbess spurs an adventure that takes the residents through time and layers of reality.

The book has deep feminist undertones, and serves as a cry against the warehousing of the aged. Miriam is the literary grandmother of the spirited elderly women in recent books such as An Elderly Woman is Up to No Good, Death in Her Hands, Fight Night, and Cat Brushing. Carrington explodes binaries in this book, blurring lines between men and women, rich and poor, native and foreigner, showing them as arbitrary lines drawn by the patriarchy. Miriam is an unforgettable character whose escapades will have the reader’s head spinning. The NYRB classics edition, published in 2020, has a truly insightful afterword by Olga Tokarczuk.

Michaela Carter’s biographical novel Leonora in the Morning Light is a true-to-life account of Carrington’s early career. In the spirit of Paula McLain’s The Paris Wife, Carter centers the woman, not the famous man she loved. It’s a swirl of the legendary characters of the Paris art scene in the 1930’s and ’40’s, such as Max Ernst, Man Ray, Salvador Dali, and Peggy Guggenheim. Packed with action and passion, it’s a credible portrait of a complex woman.

Following are a few more short story collections that toy with reality. If you like your fiction a little skewed, here are some recommendations

Friday Black by Nana Kwame Adjei-Brenyah - Adjei-Brenyah’s collection takes a hard look at race and injustice through a lens that ratchets up the sense of dystopia that we are already living through.

Nice Big American Baby by Judy Budnitz - Funny, surreal, and sometimes disturbing, the stories in this collection turn human relations on their head, portraying the American dream as more of an acid trip.

Her Body and Other Parties by Carmen Maria Machado - Ferociously feminist and fearlessly queer, Machado’s collection of fables turns an eagle eye on the indignities visited upon women’s bodies.

Men Without Women by Haruki Murakami - In this tender, compassionate collection, Murakami gently nudges the bounds of reality, putting his iconic stamp on such literary legends as Scheherezade and Gregor Samsa, as well as memorable characters of his own imagining.

Life Ceremony by Sayaka Murata - Murata’s short story collection is not for the squeamish. In her off-kilter world, people use human body parts as fashion accessories, participate in ritual cannibalism as a means of honoring the dead, and own humans as pets. Murata tells these tales with such a detached, matter-of-fact tone, that it all feels plausible.

Liberation Day by George Saunders (coming October 18) - Saunders returns to the milieu that he built his career on - quirky, timely, funny, wise short stories. This collection delivers social commentary in the guise of absurdity.

Leonora Carrington brushed shoulders with Dadaist poet Tristan Tzara during her Paris years. Here is a sample of his poetry -

what is this road that separates us

across which I hold out the hand of my thoughts

a flower is written at the end of each finger

a heavy love covered in moss

shares the gold of my thoughts

the sharp sage rouses it

and the fennel mocks it

it pours madness into the wind

where its hair’s water sinks

but had madness or sweetness

turned things upside down in my head

it’s in turn a single affliction

that comes and goes from day to day

So many great books are coming out in October! Here are a few previews -

Often the highest compliment for a work of non-fiction is to say that it “reads like a novel.” Burnet has achieved the opposite in this intriguing work. The author is the most unreliable narrator in a book full of them. In mid-‘60s London, a young woman, whose sister has recently committed suicide, suspects that her therapist, Collins Braithwaite, had a role in her death. She takes on a false persona and goes to visit Braithwaite to look for clues. The point of view shifts between Braithwaite’s biography and the unnamed woman’s notebooks.The reader enters not quite sure if any of this is real. Is Braithwaite a real person? A quick Google search says no, but the bio is very convincing, name-dropping real people such as R. D. Laing and Paul McCartney. The therapist/client relationship is uncomfortable at best, queasily unethical at worst. The power plays between the two lead to the destruction of both, but in very different ways. Case Study is a head-scratching read - surprising, puzzling, and often archly funny.

Dickens and Prince by Nick Hornby

This smart, entertaining book is just what the title implies, an essay that draws parallels between the lives and work of Charles Dickens and Prince.

There are more than you might think, and Hornby scratches deep to find them. Both men grew up in relative poverty, both were shrewd business men, both had complicated relationships with women. But the most pertinent common traits were their mind-boggling output and artistry, and the short time each man had to accomplish what they did (both lived to only 58). While Hornby often stretches and leaps like a gymnast to make comparisons, the book is solidly researched and his characteristic wry wit sparkles on every page.

Manning takes the historical fiction trope of the plucky young heroine battling the forces of society and gives it color and depth, creating a complex, relatable character. Set in the fictitious mining town of Moonstone, Colorado in the early 20th century, the book is a treatise on the value of labor unions told through the wide, incredulous eyes of teenaged Sylvie Pelletier. Her father is a miner who urges his co-workers to unionize, running afoul of the bosses. Sylvie is torn between family loyalty and the necessity of making deals with the devil to achieve justice for the exploited miners. Manning seamlessly weaves real-life characters such as Mother Jones and King Leopold of Belgium into the narrative. It’s a rousing page-turner with a heart as big as the Rockies.

Now is Not the Time to Panic by Kevin Wilson

Frankie and Zeke are two misfit teens who innocently come together over one summer in the nineties and inadvertently cause a nationwide panic. Frankie is a sullen girl who escapes the ennui of small-town life by writing dark Nancy Drew fan fiction. Zeke is a troubled aspiring artist staying with his grandmother for the summer while his warring parents battle it out elsewhere. The two collaborate on a subversive art project that upends the small town of Coalfield, Tennessee. Ripples are felt around the world, movements are formed, and the anonymous work is co-opted by groups of all political leanings. This sweet coming-of-age story is a commentary on the power of art and how memes went viral before the age of social media.

Happy Halloween! Click here to read about the history of the demonization of women who were perceived to be witches.

Click here to read Sara Woster's thoughts on the challenges of writing about art.

Leonora in the Morning Light: A Novel (Paperback)

Her Body and Other Parties: Stories (Paperback)

Now Is Not the Time to Panic: A Novel (Hardcover)

Dickens and Prince: A Particular Kind of Genius (Hardcover)