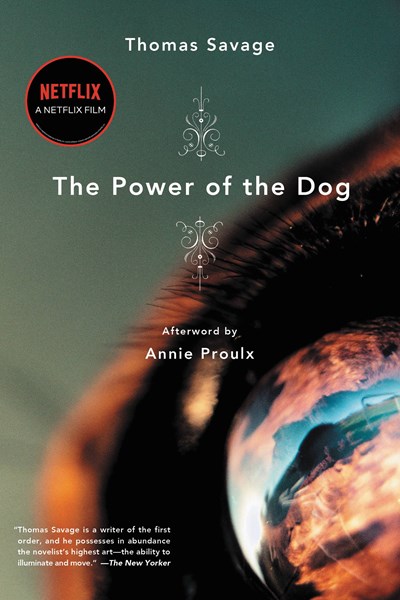 “The book was better.” We hear this axiom every day at the store, with the plethora of books being adapted into films and series. I can’t begin to understand the challenges of taking several hundred pages of text and realizing it on the screen. What to retain? What to leave out? How much can you change without betraying the author’s intent or making those who have read the book howl in protest?

This month, I’m rifling through my shelves to pick out books that have been adapted, for better or worse. One of my favorite films of the past few years is Jane Campion’s poetic The Power of the Dog. Normally, I like to read the book first, but this one slipped beneath my radar. I’m glad I went back to read it, spoilers and all. Read on -

Phil Burbank, the flinty center of Thomas Savage’s 1967 masterpiece  The Power of the Dog is a man at war with modernity and with himself. He’s a walking contradiction, deeply closeted yet outwardly rabidly homophobic, a man of questionable hygiene yet acutely intellectual with a refined taste in music and literature. He is able to castrate a steer blindfolded yet possesses a deft touch with building delicate models and playing the banjo (in one brilliant bit of foreshadowing, Savage describes his fingers as “arched like a spider over the strings”). In 1920’s Montana, progress is making its inevitable encroachment on the Old West. Cars are replacing stagecoaches, Indigenous people are reduced to squatting on white property, and horses are losing their utility as work animals. Phil is having none of it. Embittered and cruel, he hurls insults like daggers.

He and his brother, the phlegmatic George, run a ranch owned by their emotionally distant parents, a wealthy couple with connections in high places. The “Old Lady” and “Old Gent” have retired and moved to Salt Lake City. taking most of the furniture and leaving Phil and George to live in a house that retains an air of “disappointed elegance.”

George is a gentle, dim soul who wearily weathers the barrage of Phil’s vitriol. He impulsively marries Rose, a widow with a gay teenaged son, Peter. Rose and Peter become immediate targets for Phil, who devises subtle and no-so-subtle ways of making sure they know they are unwelcome in his home.

The sexual tension between Phil and Peter is as tight and charged as a telegraph wire. After putting Peter though an initial hazing, Phil seems to soften toward him, taking him under his wing and teaching him the literal ropes (Phil is a skilled rope maker.) Peter is a secretive young man who aspires to medical school. Sensitive and keenly observant, he harbors his own brand of cruelty, hinted at throughout the novel, and reaching full fruition in the shocking ending.

Though set in the wide expanses of Montana, the book has a claustrophobic air, with George, Rose, and Peter trapped in Phil’s web. Savage gives us an astutely drawn character study, and a discomfiting evocation of a time and place in America’s dark past.

If Beale Street Could Talk by James Baldwin

Made into a feature film in 2018, this heart-breaking story of young love struggling against the forces of injustice is one of Baldwin’s warmest reads.

Play it as it Lays by Joan Didion

Didion’s dark, brooding commentary on the ennui of mid-century American life was given a stylish, chilling 1972 adaptation.

Nobody has a more skewed view of mythology than Gaiman. This darkly funny take on the foibles of the gods was made into a series that premiered in 2017.

This classic is a tightly-wound spool of menace, a deep dive into a mind warped by despair and ennui. The biopic Shirley, released in 2020, is a hallucinogenic look at the period in Jackson’s life when she was writing the novel.

A plague has wiped out most of the world’s population. The microcosmic societies that bloom among the survivors reflect the best and worst of the world in the beforetimes. The book was made into a streaming series in late 2021 by Patrick Somerville.

LIfe of Pi by Yann Martel

Stranded at sea in a small boat with a Bengal tiger. What could possibly go wrong? Ang Lee made an evocative adaptation of this magical realist novel in 2012 (in 3D!)

“Drive My Car” from Men Without Women by Haruki Murakami

Murakami’s wry, elegiac story of a middle-aged actor’s bond with his 20-year-old chauffeur was adapted last year by Ryusuke Hamaguchi.

Pynchon’s psychedelic noir novel about a stoner PI in the early ’70’s was adapted by the inimitable Paul Thomas Anderson in 2014.

“Escape From Spiderhead” from Tenth of December by George Saunders

A dystopian tale of a high-tech penitentiary run by a brilliant scientist who conducts cruel experiments on the prisoners. Adapted earlier this year as Spiderhead by Joseph Kosinski.

Sinclair made a career of exposing the evils of capitalism. This rich novel about the dawning of the petrochemical age was brilliantly adapted in 2007 by Paul Thomas Anderson as There Will Be Blood.

There are a lot of great books coming out in October! Here are a few sneak previews -

Saunders returns to the milieu that he built his career on - quirky, timely, funny, wise short stories. This collection delivers social commentary in the guise of absurdity. A hell-themed amusement park spurs an existential crisis for one of its employees. A grandfather writes a poignant letter to his grandson in an indeterminate future that is uncomfortably close to our current reality. An elderly man has his memory scrubbed in a dystopian treatise on language, loss, and politics. Each of the nine stories stands up to, in fact demands, multiple readings. Liberation Day is a treasure trove of subversive, empathetic fables.

Our Missing Hearts by Celeste Ng

Ng takes a sharp turn from her previous work into dystopia in this engrossing novel. The world she creates is queasily close to the one we are living in now. Under PACT (Preserving American Culture and Traditions Act), book-banning and racist policing are sanctioned by the government. Margaret Miu is a poet whose work is taken up by a resistance movement in defense of Asian Americans, who have been scapegoated for The Crisis, an economic crash that is blamed on China. She leaves her husband and son Bird and goes into hiding, working with the resistance. The POV shifts between Bird and Margaret, each living in their own claustrophobic world. The tension tightens like piano wire, threatening to snap at any moment. Our Missing Hearts is a propulsive cautionary tale.

The Wolf Age: The Vikings, the Anglo-Saxons and the Battle for the North Sea Empire by Tore Skeie

Tightly-written, action-packed, and immensely readable, this is renowned historian Skeie’s English-language debut. Covering the late 10th-early 11th centuries in Scandinavia, Britain, and beyond, the text widens the lens from battles and successions to vivid descriptions of the life and landscape of medieval Europe. The book is meticulously sourced and richly descriptive, bringing fresh insights into Northern European history. Skeie’s depictions of the machinations that eventually brought an end to the Viking empire and led to the rise of theocracy are the stuff of great cinema.

And now, take a deep, cleansing breath and read this lovely poem by Thich Nhat Hanh -

George Saunders is not only a great writer, but a great teacher of writing. Click here to read his thoughts on overcoming uncertianty in writing.

One of my favorite comfort views is the warm, fuzzy Ted Lasso. Click here to discover the many literary references sprinkled throughout the show.

It's no secret to my regular readers that I'm a sucker for a good literary western. Here's a short list of some great western reads, compiled by author Gordy Sauer.

The Power of the Dog: A Novel (Paperback)

Play It As It Lays: A Novel (FSG Classics) (Paperback)

Our Missing Hearts: A Novel (Hardcover)

The Wolf Age: The Vikings, the Anglo-Saxons and the Battle for the North Sea Empire (Paperback)